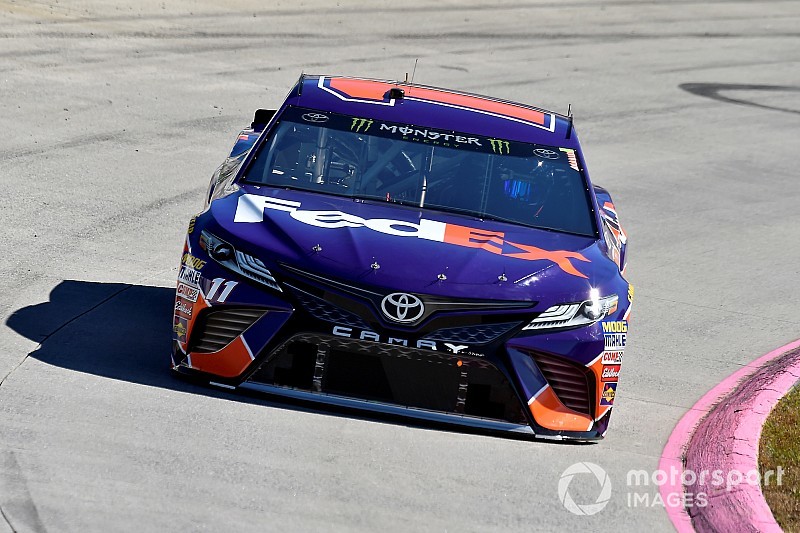 Kyle Busch, the pole-winner, took early command of the race and had moved out to a more than 1-second lead over Hamlin after 15 laps.

Busch began to encounter lapped traffic which allowed Hamlin to get around Busch and take the lead on Lap 31 for the first time in the race.

On Lap 36, Bowyer made his way around to Busch and into the second position.

On Lap 44, Jeb Burton hit the Turn 2 wall, which brought out a caution. All of the lead-lap cars elected to pit for fuel and tires with Kyle Busch the first off pit road. He led the way on the restart on Lap 50.

Alex Bowman was penalized for speeding on pit road by NASCAR and had to restart from the rear of the field.

With 70 laps remaining in the first stage, Busch maintained an almost 1-second lead over Logano with Hamlin running in third.

Jimmie Johnson spun off Turn 4 on Lap 71 and hit the wall to bring out a caution. “I wheel-hopped going into the turn,” Johnson said over his radio.

Most of the lead-lap cars elected to remain on the track and Kyle Busch continued to lead the way when the race returned to green on Lap 77. He was followed by Logano and Hamlin.

With 40 laps remaining in the first stage, Kyle Busch held a small lead over Hamlin as Logano moved back into third.

All eight drivers remaining in the playoffs were running 11th or higher with 20 laps left in the first stage.

On Lap 116, Hamlin finally found his way back around Kyle Busch to retake the lead.

Before the race began, the cars of Brad Keselowski and Landon Cassill both had to drop to the rear of the field for unapproved adjustments following impound.

Take a virtual lap around Martinsville Speedway with NASCAR Heat 3: