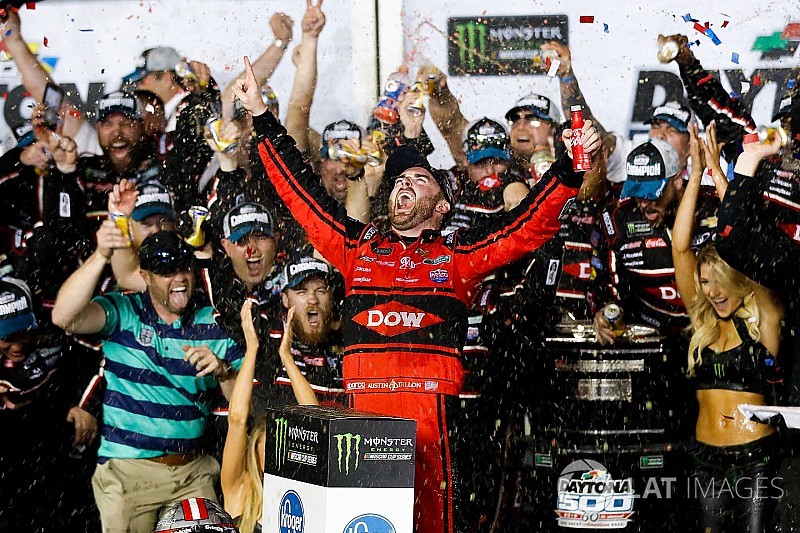 Austin Dillon brought the No. 3 Richard Childress Racing Chevrolet back to Victory Lane for the Daytona 500 for the first time in 20 years.

Dillon assumed the lead in Turn 3 after Aric Almirola wrecked on the last lap.

“Right now I just want to thank the good Lord above. I did what I had to do there at the end. I hate it for the No. 10 (Aric Almirola) guys. We had a run, and I stayed in the gas. It is what it is here at Daytona. This is so awesome to take the No. 3 car back to Victory Lane 20 years ago. This one is for Dale Earnhardt, Sr. and all those Sr. fans.  I love you guys.  We are going to keep kicking butt the rest of the year!”

“I was just trying to get everybody on the inside line to buy in,” Hamlin said. “We just didn’t quite get it to work.”

Kurt Busch's chances at a repeat end in calamity

A 13-car wreck involving defending Daytona 500 winner Kurt Busch with two laps remaining, shook up the field for the final restart with Hamlin in the lead.

The No. 78 team was penalized during pit stops between the segments for an uncontrolled tire. Kyle Larson’s team had too many men over the wall.

By Lap 130, the front 12 cars were single-file. Bayne pitted from fourth-place and took right-side tires. He dropped to 22nd, one lap down. With 65 laps to go, Menard, who was running ninth, attempted to make something happen on the inside lane with Stenhouse and Kurt Busch.

With 60 laps to go, 12 cars compiled the front conga line. Kurt Busch tested the inside lane but pulled into 13th behind Almirola.

The leaders pitted on Lap 171. Joey Logano, who was running second, was busted for speeding on pit road in Section 1. He served his penalty on the next lap and apologized to the team for not pumping his brakes in time. He fell to 15th.

With 15 laps to go, the front pack caught Logano and put the No. 22 Ford one lap down. Logano squeezed in between Bowman and Truex. Wallace moved to the bottom and dropped to 10th.

William Byron blew a right-rear tire and spun off of Turn 4 with 10 laps to go. The No. 24 Hendrick Chevy stopped just before the entrance of pit road.

Blaney selected the inside lane for the rear on Lap 193. The No. 12 Ford shot to the front with a push from Kurt Busch, who went low in Turn 3 for the lead. Hamlin went high and took the lead at the line. Busch moved back to the lead on the backstretch with a push from Almirola on Lap 195. With four laps remaining, Blaney passed Busch up top on the backstretch followed by Hamlin. Blaney held the point again with three laps to go. Hamlin took the lead with two to go but as the field went through Turns 1 and 2, Blaney took the air off of the back of the No. 41 Ford and Busch spun into the pack collecting Stenhouse, Gaughan, DiBenedetto, Truex, Bowman and Allmendinger.