Drivers stole the show but the fans took home the prizes at the Fremont Street Experience.

DAYTONA BEACH, Fla. (Dec. 4, 2013) – In the end, there was only one grand prize winner during the fifth annual Fanfest Presented by Las Vegas Motor Speedway held at the Fremont Street Experience, and she chose Kyle Busch and his case.

The game-show format event featured six contest-winning fans selecting cases containing assorted prize packs from among the 13 Chase for the NASCAR Sprint Cup drivers. Each fan had the opportunity to select a driver and his sealed case during one of six rounds. Before revealing their prize, each fan had the choice to stay with that case or choose four others to eliminate. Between each round the cases were shuffled among the drivers. 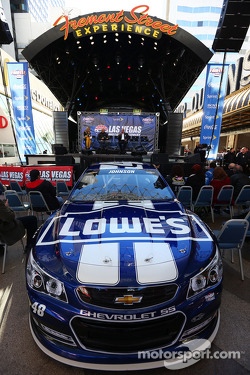 With unseasonably low temperatures for Las Vegas the top-six drivers in the final series standings were rewarded with personal heaters onstage to bear the cold. Unfortunately, Chase drivers finishing between seventh and 13th were seated in the second row and had no such convenience, including a shivering Clint Bowyer.

“Clint, you look cold,” teased host and ESPN pit reporter Jamie Little. “If you finished in the top six, you would have had your own heater.”

Bowyer wasn’t the only driver suffering from the cold. Six-time NASCAR Sprint Cup Series champion Jimmie Johnson, who had a heater, received laughs from the audience when it was discovered his heater wasn’t working properly as Little picked it up to keep him warm.

As the rounds drew on, the drivers became increasingly helpful in providing the contestants suggestions on which cases to select, despite the banker’s warnings.

“Let me remind the drivers that if they reveal their cases, they will start at the rear of the field for the KOBALT Tools 400 (the March Las Vegas race),” joked the banker.

His warning did little to deter the drivers.

“I think the offer is a really good offer,” Dale Earnhardt Jr. informed the second fan, who ended up winning two tickets to the March race at Las Vegas Motor Speedway.

The fourth fan chose Johnson, who suggested she select a different case based on his knowledge of the contents of his own case. The fan then chose Busch, who offered the same insight, as did Jeff Gordon and Ryan Newman. Kasey Kahne came to the fan’s rescue when he raised his hand and recommended he be selected. The crowd went nuts.

“Trust us, we’re really setting this game up well for the contestants,” Busch said.

Ultimately, the fan accepted the banker’s deal and ended up with race tickets to Las Vegas Motor Speedway and Neon Garage passes.

Every fan walked away a winner with prizes including key chains, hats, race packages and even tickets to the NASCAR Sprint Cup Series Awards for the Grand Prize winner.

Also honored on Wednesday were this year’s finalists for the Betty Jane France Humanitarian Award – Duncan Dobie, Lisa Hall, Richard Johnson and Don Post – at an afternoon reception at Wynn Las Vegas. The NASCAR Foundation will announce the Award winner during this year’s NASCAR Sprint Cup Series Awards. Fans can cast their vote to determine the 2013 Betty Jane France Humanitarian Award winner by visiting www.NASCAR.com/Award before 11:59 p.m. ET on Dec. 5.

Jimmie Johnson celebrates 6th title with eye on a 7th