“This is crazy,” said the three-time NASCAR Sprint Cup champion. “What an honor. It’s very humbling.” 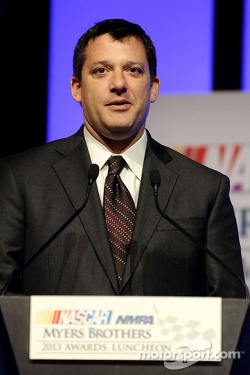 “But he’s also helped others on many occasions; quietly and without recognition,” said NMPA President Kenny Bruce. “The stories of our winner’s big heart have gotten around; much to his dismay, I’m sure. Trust me, they’re endless.”

Bruce’s introductory remarks were echoed by master of ceremonies and FOX Sports broadcaster Mike Joy. “What he does for the sport makes him one of a kind.”

The NMPA Myers Brothers Award is presented in the names of pioneer NASCAR competitors Billy and Bobby Myers. Past recipients are a virtual who’s-who of the industry – drivers, owners, track operators, sponsors and members of the media – and include nearly every current member of the NASCAR Hall of Fame.

Stewart was cited for a longtime body of work – and specifically for his role in taking NASCAR back to its roots. He and his staff at Eldora Speedway in Rossburg, Ohio, produced the NASCAR Camping World Truck Series “Mudsummer Classic,” the sanctioning body’s first national points competition on a dirt surface in more than four decades.

“I’d always joked around that having a dirt race on the schedule would be really great,” Stewart said.

Stewart, however, prefers to credit others – specifically NASCAR Senior Vice President of Racing Operations Steve O’Donnell and Eldora Speedway manager Roger Slack – for the ultimate success of the “Mudsummer Classic.”

Stewart’s 2013 season was cut short by a broken leg suffered in a sprint car accident in early August. He crossed the stage on Thursday without the aid of crutches to accept his award and should be ready to battle for his fourth NASCAR Sprint Cup title when the 2014 season opens with February’s Daytona 500.

“It was hard sitting on the sidelines watching,” he said addressing his 13 fellow drivers who competed in the Chase for the NASCAR Sprint Cup™. “It’s given me a different perspective.”

Dale Earnhardt Jr. was named the NMPA NASCAR Most Popular Driver in the NASCAR Sprint Cup Series for a record, 11th consecutive season. He matched Bill Elliott’s mark a year ago although the 1988 NASCAR Sprint Cup champion continues to hold the overall record of 16.

Earnhardt said many things motivate a driver to compete at a high level.

“None impacts us more than the fans,” he said. “This year we feel like we were giving them a lot to cheer for on the race track and paying them back for all the years they’ve voted for us to win this award.”

In the end, more than one million votes were tallied for 39 eligible drivers with Earnhardt collecting in excess of 700,000 votes.

A complete list of awards presented during Thursday’s NASCAR NMPA Myers Brothers Awards Luncheon can be found at the end of this release.

“Obviously, there’s some business things we’ve got accomplished like getting our media rights secured for the next decade,” he said. “That’s tremendous for the industry; great visibility. NBC is going to do a really good job (beginning in 2015).”

“There were some fair questions and expectations – would we get that right and in ‘08 (with the Car of Tomorrow), we didn’t,” he said. “I think we changed that in a big way getting the car manufacturers, the teams and others all on the same page and we have a better racing product, which is the center of it for all of us.”

The premier series’ three manufacturers were named joint recipients of the 2013 Buddy Shuman Award for their role in creating race cars styled to better connect the sport with the pride of car ownership shared by millions of North American consumers.

The 2013 season also saw the emergence of future – and diverse – stars such as Kyle Larson in the NASCAR Nationwide Series and Darrell Wallace Jr. in the NASCAR Camping World Truck Series. Larson is the first Asian-American to win a Sunoco Rookie of the Year Award in one of NASCAR’s national series. Wallace was the first African-American driver to win a NASCAR national series race in nearly 50 years.

“You saw a mix of things coming in the future,” France said. “They’re going to be with us; Kyle Larson being one, at the Cup level beginning next year. Darrell Wallace had a bit of a breakout year for himself.”

Despite cooler than normal temperatures, thousands of fans lined The Strip – Las Vegas Boulevard – as the top-13 drivers celebrated the conclusion of the 2013 season with the fifth annual Victory Lap. Engines rumbled and smoke from burnouts filled the air during the popular event that started and finished in front of the Miracle Mile Shops on Las Vegas Boulevard.

Additional events Thursday included the NASCAR After The LapTM sponsored by Ford and Coca-Cola at the Pearl Palms Concert Theater inside the Palms Casino Resort, a “tell-all” driver-fan interaction that lived up to its promise as one of the most sought after off-track tickets.