“Oh boy, this is a surprise. I’m having a hard time composing myself,” said Gordon, during the Champion’s Week event. “Couldn’t someone have warned me first?”

I am deeply honored.

Named for NASCAR racing pioneers Billy and Bob Myers, the award recognizes individuals and groups which have provided outstanding contributions to the sport of stock car racing. Past recipients are a virtual who’s-who of the industry – drivers, owners, track operators, sponsors and members of the media – and include nearly every current member of the NASCAR Hall of Fame.

Gordon’s accomplishments are two-fold: his on-track success, which includes four NASCAR Sprint Cup championships and 87 victories; and his charitable activities when not competing.

“Off the track, he has raised countless funds for charity through his foundation for pediatric cancer research,” said Burt Myers, grandson of Billy Myers, upon presenting the award with brother Jason Myers to Gordon. “He has traveled to Rwanda to aid with health care as well as partnering with an organization to put it on the side of his race car as a drive to end hunger.”

“I am deeply honored, proud of the work that I do on and off the track,” said Gordon. “This is fantastic. Thank you.”

NASCAR Chairman of the Board and Chief Executive Office Brian France congratulated 2012 NASCAR Sprint Cup champions Brad Keselowski and Roger Penske and the Miller Lite organization. France also commented on the youth movement in the NASCAR Nationwide and NASCAR Camping World Truck Series and first-time events due to take place in both national series in 2013. 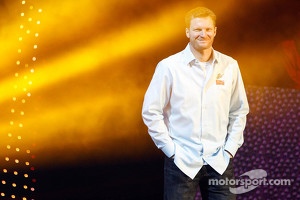 Also announced at Thursday’s luncheon was the NASCAR NMPA Most Popular Driver Award, given to Dale Earnhardt Jr. for the 10th consecutive year. This now ties him with Bill Elliott as the only other drivers to be presented the award 10 straight years. Elliott, however, remains the all-time leader with 16 overall.

Earlier Wednesday, Chevrolet unveiled its next generation NASCAR Sprint Cup car – the new SS model – which, while tested extensively with Ford’s Fusion and Toyota’s Camry, had its configuration obscured in camouflage. The wraps officially came off today at the Wynn’s Encore Theater before hundreds of media members and industry and sanctioning body officials.

Four teams and their drivers displayed their next generation Chevrolets – the No. 1 Earnhardt Ganassi Racing with Felix Sabates and Jamie McMurray; No. 14 Stewart-Haas Racing and Tony Stewart; the No. 29 Richard Childress Racing and Kevin Harvick and the No. 48 Hendrick Motorsports and Jimmie Johnson.

“We've both been focusing on a number of important initiatives to build a stronger connection with our fans by incorporating relevant technologies that we're using on today's high-performance Chevrolets, while also creating designs that help our fans make the link between what they see on the track, on the streets and in Chevy showrooms,” said Mark Reuss, president of General Motors North America, comparing the SS passenger car with its competition-prepared counterpart.

“The new SS won’t be mistaken for any other car on the track. It bears a striking resemblance to our production car, the 2014 SS and that will be in showrooms here next fall.” 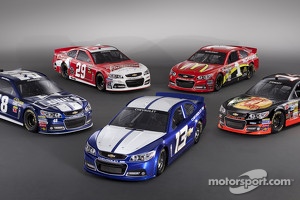 “The anticipation going into 2013 is building, it will build over the off season and it'll be, we feel, one of the milestones that we'll look back as we celebrate our history in the future; we'll look back and see 2013 and the NASCAR Sprint Cup car as a very significant milestone for us,” said Helton.

Thousands of fans lined The Strip – Las Vegas Boulevard – as the top 12 drivers celebrated the conclusion of the 2012 season with the Fourth Annual Victory Lap. Engines rumbled and smoke from burnouts filled the air during the popular event which started and ended at Planet Hollywood Resort & Casino.

Additional events Wednesday included the NASCAR After The Lap Sponsored by Ford and Coca-Cola, a “tell-all” driver-fan interaction that’s quickly become one of the most sought after off-track tickets. Day Three of Champion’s Week ended with the presentation of the “Stewie Awards,” three-time NASCAR Sprint Cup champion Tony Stewart’s sometimes irreverent take on the 2012 season.

Earnhardt Jr continues his reign as NASCAR's most popular driver