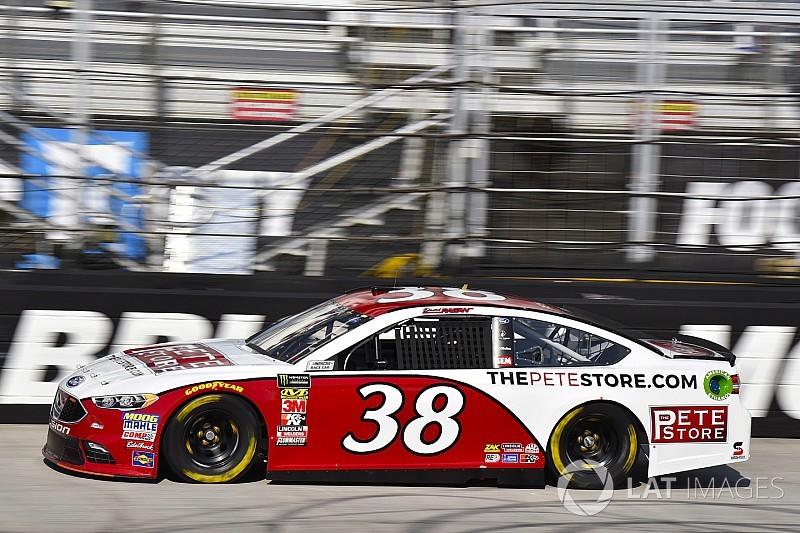 Team driver David Ragan paced Saturday’s final practice with an average lap speed of 127.487 mph, which he sent early in the session.

“Our Front Row Motorsports Fords have a little bit of speed in them. I think the track is going to change a tremendous amount between Friday, Saturday and Sunday, so we’ve got to be really methodical on how we adjust our race car and our balance,” Ragan said Saturday.

“Not only is the grip level changing a lot, I think the groove is going to change some. It’s good to know that our cars do have some speed and if we can get the balance close, so we just have to stay on top of the track conditions.”

In the final three minutes of practice, Kurt Busch spun off Turn 2 and slammed into the inside wall, doing extensive damage to his No. 41 Ford.

Busch had qualified second for Sunday’s race. His Stewart-Haas Racing team will have to move to a backup car, which will mean he will have to start the race from the rear of the field.

"I had 45 laps on the tires and was trying to get to 50," said Busch. "The setup changes dramatically with air-pressure builds and the VHT changing, so I was just trying to do as much research as I could," Busch said after the incident. "The lap times were really good in the car and then, boom, there’s just no forgiveness right now with how many variables there are.”

Busch will join SHR Kevin Harvick starting from the rear of the field on Sunday. Harvick wrecked in Friday’s practice and also had to move to a backup car.

Two drivers – Austin Dillon and Landon Cassill – were forced to sit out the final 15 minutes of the practice session because their cars both failed pre-qualifying inspection twice on Friday.

Darrell Wallace Jr.'s Daytona 500 car to be sold at auction