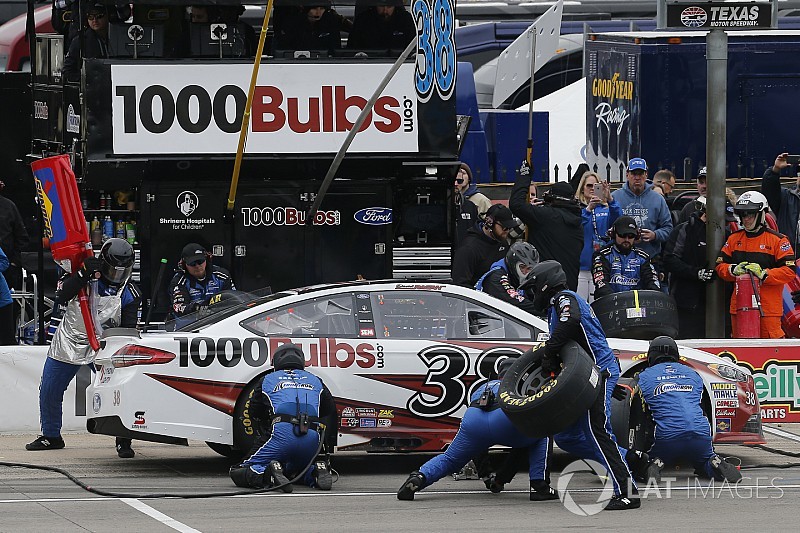 Since the introduction of standardized pit guns at the start of the 2018 Monster Energy NASCAR Cup season, there have been multiple complaints from the competitors.

At least three teams reported issues after Atlanta with some criticizing the Paoli pit guns for their apparent lack of reliability.

Kevin Harvick voiced similar frustrations after a plethora of pit road issues at Texas this past weekend, where he finished second to Kyle Busch.

But one team that has not encountered any issues is the No. 38 Front Row Motorsports Ford of David Ragan. The point of the uniform pit guns was to both cut costs, but according to Ragan, it has also helped level the playing field on pit road between the top tier teams and the smaller organizations.

"Last year there was no chance we could average in the top 10 or 12 in pit stops over a weekend because our equipment was inferior to compared to the Joe Gibbs Racing teams, maybe the Penske teams and Hendrick Motorsports teams," Ragan told SiriusXM NASCAR Radio. "Because they had special components, parts and pieces in their air guns and maybe even jacks that allowed them to do it faster and more efficiently. So I think the rule NASCAR came out with the common gun -- I know there's been some instances where they've had some malfunctions and issues here and there. We've not had one. Our crew has had as many pit stops as anyone this season and we've not had one issue all season-long that I'm aware of."

With the issues, a lot of blame has been thrown at NASCAR, but Ragan believes it's just easier to point the finger at the sanctioning body now.

"It's easy to blame NASCAR," he said. "If it were a Joe Gibbs Racing pit gun, they're probably not going to blame Coach (Joe) Gibbs. You're not going to say anything. So I think we've heard a little bit more talk about it because it's someone else's part and it's easy to throw that blame. But at the end of the day, it has allowed teams like Front Row Motorsports and I think a few other teams to have some really competitive pit stops."

Eye in the Sky: Tony Hirschman uses experience to his advantage