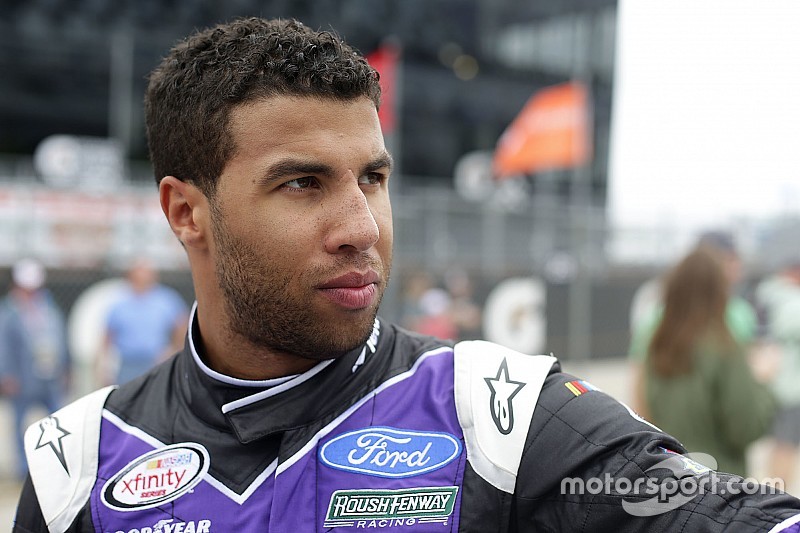 Darrell “Bubba” Wallace is expected to make his Monster Energy Cup Series debut in the iconic No. 43 Ford with Richard Petty Motorsports next Sunday at Pocono Raceway.

Wallace becomes the first African-American driver to compete in NASCAR’s top tour since Bill Lester drove for Bill Davis Racing in 2006. Lester’s top finish was 32nd at the June Michigan race that season.

Wallace is subbing for Aric Almirola, who broke his back in a vicious wreck at Kansas Speedway on May 13.

"We're excited to have Bubba in the No. 43 car and to give him his first Monster Energy Series start," said Brian Moffitt, CEO Richard Petty Motorsports. "He has shown success in NASCAR's national series and we look forward to him continuing to display his abilities in our car. We're fortunate to have someone with Bubba's potential in the Ford Performance family who can step in for us until Aric is healed."

"We are excited for Bubba to get this opportunity to drive the iconic No. 43 Fusion for Richard Petty Motorsports," said Dave Pericak, global director, Ford Performance. "We couldn't be happier with the progress of Aric Almirola's recovery and can't wait to get him back. In the meantime, this is a great opportunity for Bubba to show what he can do at the top level of the sport, and we are committed to helping RPM win races. We are proud of the collaboration between RPM, Roush Fenway and Ford to make this driver transition happen, and it's a great example of the One Ford mentality we have in order to make the overall Ford NASCAR program better."

Watch this update on Wallace getting named to drive the No. 43 car. Click on image below:

Wallace, 23, is currently fourth in the NASCAR Xfinity Series standings. The driver of the No. 6 Roush Fenway Racing Ford finished sixth six times this season and scored his seventh top 10 on Saturday at Dover, where he ran eighth. But his move to RPM signals Roush Fenway Racing's transition of the No. 6 Xfinity Series team. While Wallace will perform double duty this weekend at Pocono, the team will then suspend operations of the No. 6. However, RFR will run a second team for development driver Ty Majeski at both Iowa Speedway races, but that will be the No. 60. As for Bubba, they "will continue to evaluate additional potential opportunities for Wallace to run in NXS races."

Wallace came up through the NASCAR Drive 4 Diversity program. He started in the K&N Pro Series in 2010 at 16. In three full seasons, Wallace scored six wins and four poles in 36 races as well as 16 top fives and 25 top 10 finishes.

The Mobile, Alabama native blossomed in the truck series with five wins, three poles, 14 top fives and 26 top 10s in 44 races. He finished a career-best third with Kyle Busch Motorsports in the 2014 truck standings.

After a limited run in the Xfinity Series with Joe Gibbs Racing in 2012, Wallace moved to Roush Fenway Racing where he has campaigned full-time in the No. 6 Ford for the last three seasons.

"Driving the famed 43 car is an unbelievable opportunity for any race car driver," said Wallace. "With all that Richard Petty has contributed to the sport, I'm honored to start my first Monster Energy NASCAR Cup Series event with this team. I'm incredibly grateful that Ford, Richard Petty Motorsports and Smithfield have the confidence in me to help fill the seat until Aric (Almirola) fully recovers, which is the most important piece of this. Moving up to the Monster Energy Series is a tremendous challenge, but I am ready to represent this organization, help the 43 team get the best results possible and prove that I belong at this level."

A teleconference has been scheduled tentatively for Tuesday at 11:00 am with Wallace.