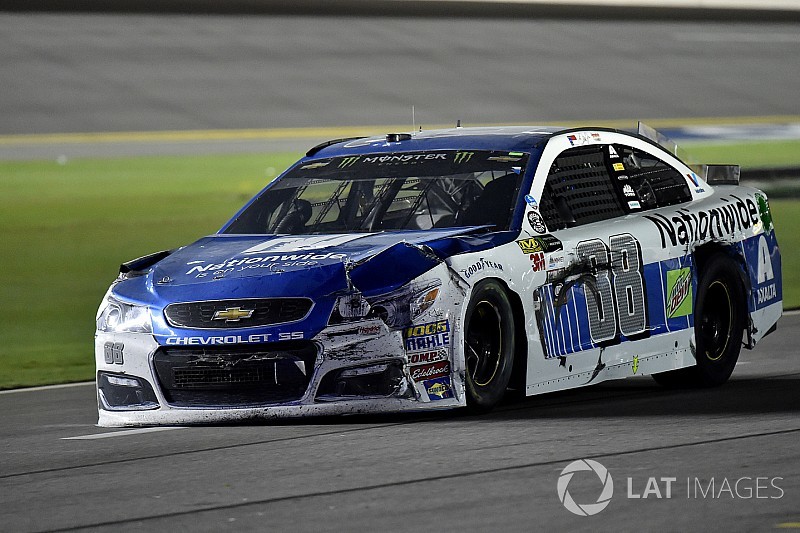 In what was likely his final appearance at Daytona International Speedway, Dale Earnhardt Jr. recovered from one on-track incident only to find himself in another.

Two was too much.

Earnhardt fell two laps down early in Saturday night’s Coke Zero 400 after an incident with Paul Menard on Lap 51 of 160 but had made his way back on the lead lap and up to sixth when he found trouble again.

On Lap 106, Kevin Harvick – riding right in front of Earnhardt’s No. 88 Chevrolet – appeared to cut a tire, immediately fell off the pace and ignited a multi-car wreck, which collected Earnhardt and several others.

“It just blew out and unfortunately wrecked half the field,” Harvick said over his team radio. “That’s what happens when you ride around on crappy tires.”

This time, the damage was too much for Earnhardt’s Hendrick Motorsports team to repair and he was forced to drive his car slowly into the garage and out of contention for a much-needed victory.

“As soon as we got our laps back, I knew anything was possible,” Earnhardt said after a trip to the infield care center. “We were just drafting back up through there and I think (Harvick) had a flat and just really had nowhere to go.

“It was fun. We had a pretty strong car.”

Regarding the first incident, Earnhardt said he had brushed the wall a couple of laps before and believed he had a right-front tire going down.

“It was trying to spin out and so I was trying to lift (off the accelerator) but there was really nothing I could do because there was so many guys right behind me,” he said. “The guys worked on the car, we got our laps back and we were about to have some more fun and mix it up and then that happened with (Harvick).

“It’s been wild night. I didn’t anticipate this much action and this much torn up sheet metal. There’s still a lot of racing left.”

Entering the race mired in 22nd place in the Monster Energy NASCAR Cup Series standings, a win is likely Earnhardt’s only chance to reach the playoffs in his final season as a full-time competitor.

He seemed primed to take advantage this weekend, as he was fastest in final practice on Thursday and on Friday won the pole for Saturday night’s race.

It was not to be.

“I didn’t expect all the attention. My phone was buzzing all day long, social media was going crazy with everybody talking about this being my last Daytona race,” he said. “I hope every weekend ain’t like this as far as that goes.

“The reaction from the fans makes me feel great. Hopefully, we’re able to turn that around and back on them the rest of the season and thank them for everything they’ve done. I wish we could have had a good finish tonight, or a win. It wasn’t to be.”