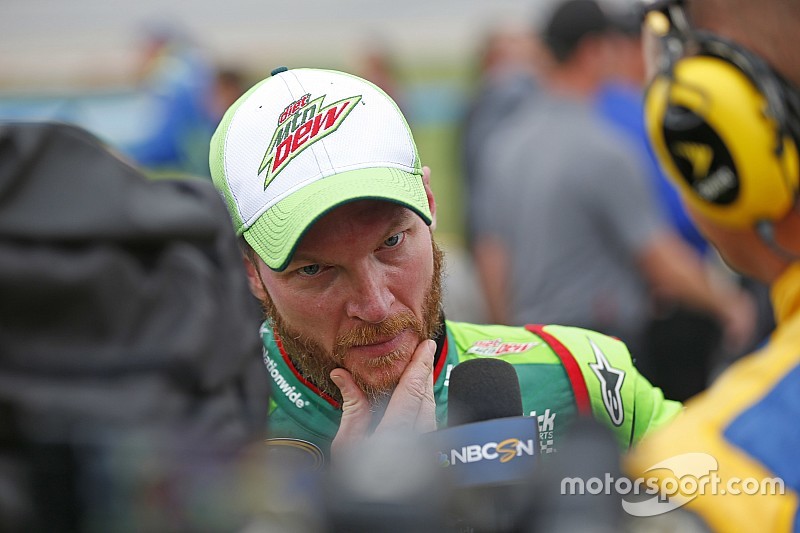 Even a second chance at a final restart couldn’t get Dale Earnhardt Jr. the win he needed to advance to the next round of the Chase for the Sprint Cup.

Earnhardt battled back from a late-race pit road penalty to get in position for the victory a caution was displayed after Jamie McMurray blew an engine.

That set the race up for its lone attempt at a two-lap overtime. Except before the restart actually began, NASCAR waved it off when Jimmie Johnson and Kyle Larson wrecked after Jeff Gordon got into the back of leader Joey Logano.

NASCAR put the cars still running back in place then tried again at the two-lap overtime. Earnhardt was lined up alongside Logano but as they entered Turn 1 another wreck erupted behind them triggered when Kevin Harvick fell off the pace with engine problems.

This time the caution came out and with no more overtime attempts, Logano as locked in as the race winner and Earnhardt was locked out of the next round of the Chase.

“They had an accident and needed to throw the yellow, so it was dangerous to keep going ... Everybody is going to ask me a hundred times how I feel about the green-white-checkered rule now. I feel good about it. It was a good safe call.”

Fans in attendance – a large majority fans of Earnhardt – waited patiently for the final lap to be run under caution as NASCAR double-checked video to ensure it had the right winner. But the No. 22 never left the first position atop the scoring tower much to their disappointment.

“The race ended per the rules and I’m totally okay with that. They decided officially who won the race and Joey won it,” Earnhardt said. “He has had an awesome round. Unbelievable really. We did everything we could today. Almost perfect, tried really hard.”

Officially, Earnhardt, who was credited with a second-place finish, ended the day 11th in the series standings with the top eight advancing to Round 3 of the Chase.

Earnhardt can still finish as high as fifth in the series standings based on his performance in the remaining four races this season.

In fact, not long after the race Earnhardt was able to find some additional motivation to go for a win in next weekend’s race at Martinsville, Va. He posted the following to his Twitter account: