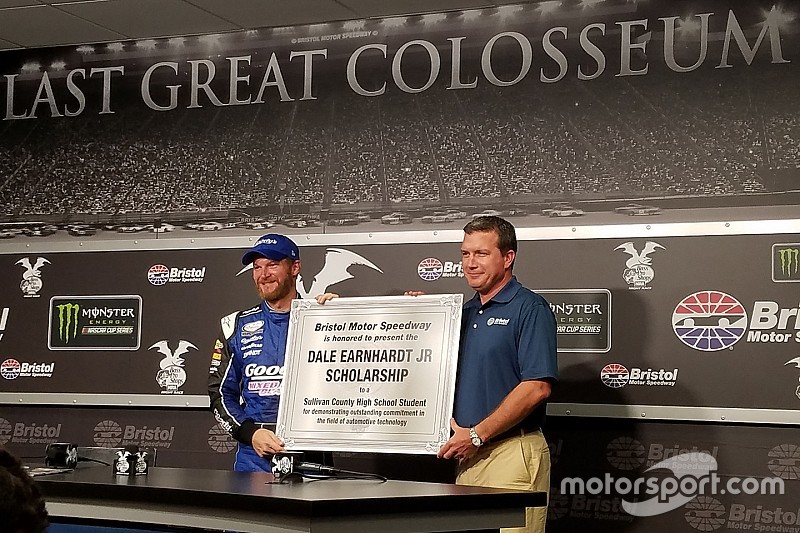 What do you get for the guy that has everything?

If you’re Bristol Motor Speedway — and that guy is Dale Earnhardt Jr. — you have to get creative.

Bristol track president Jerry Caldwell took a philanthropic approach to honoring NASCAR’s Most Popular Driver by endowing a scholarship in Earnhardt’s name to a local high school graduate planning to pursue a career in automotive technology.

Earnhardt, who cherishes his childhood memories of Bristol more than his short-lived stint as a mechanic, was blown away by the generosity of the gift.

“That’s exactly the kind of thing that gets me excited,” Earnhardt said. “I’ve been blessed with a lot of things. I don’t need anything else. If the track is going to make an effort — even put some money into something — I’d rather they do something that’s going to make an impact in somebody’s life.

“That’s an awesome award for me to see someone deserving benefit. I enjoy that. It’s fun to see how the tracks get creative and make an impact in their own communities. I thought it would be a one-time deal, so it surprised me that it was going to be annual. But I think the track should be commended on an effort to do something that’s going to be a long-lasting thing that impacts someone else’s life.”

Earnhardt is savoring the final stops on his Monster Energy Cup retirement tour. He can appreciate the quality of life he has today. One year ago, when he was sidelined with a concussion, Earnhardt was certain he’d ever race again.

The decision to come back

Selflessly, he came back but the stars just haven’t lined up for Earnhardt in his final season of full-time competition.

“There was a point during the recovery of my rehabilitation — there was a big chunk of time — where I wasn’t coming back,” Earnhardt said. “I’d made up my mind, I wasn’t going to come back,” Earnhardt said. “My doctor always says that you can get well enough to be able to be just back to yourself. But to be an athlete in any sport, you have to possess instincts and reaction times — you possess these attributes that are above the average individual. So, you hone those. Over the years, those are improved and sharpened.

“When I got hurt, I lost all that. I lost all of my advantage to being a race car driver. That wasn't a big deal because I was so bad off, that I just wanted to make sure I got normal. I just wanted to get back to where I wasn’t miserable all the time and feeling miserable.”

Once Earnhardt reached a level of wellness and decided he would drive this season, there was no turning back. But the season certainly has not unfolded the way he had hoped. Earnhardt is currently 22nd in the standings with just one-top five finish in the first 23 races.

“I thought I could come back and do well,” Earnhardt said. ‘There’s a lot of things that play a role in being competitive. I’m healthy. And I’m happy and thrilled that I’m happy. I still think I can drive a race car. But there’s really no excuse for us not performing well or meeting expectations. There’s no excuse for missing a lot of races. Kyle (Busch) missed a lot of races with his injuries and came back and was successful right out of the gate.

“I felt like I was ready. I felt like I could come back and compete. I still feel that way. We just have to get our stuff together as a team. The team works closely enough with me to know that I’m plugged in and they still see something in me that gives them the confidence that if we can get the cars going and get everything working right, we can have some good runs. There’s still some time to make that happen. But we have a long ways to go to catch some of those guys. Some of those guys are so fast. I don’t know where that speed’s at but it’s not at the race track.”

Earnhardt says he was charged up when he got to the season opening Daytona 500. And he still feels good today.

“I don’t feel like I’m missing anything or that I’m not mentally or physically aware,” Earnhardt said.

Perhaps returning to his favorite track will jumpstart the season for the driver of the No. 88 Hendrick Motorsports Chevy. Even before he was honored by Bristol Motor Speedway, Earnhardt felt connected to the community.

Growing up, he couldn't wait to speed time with other racers’ children in the infield and around the facility.

“Honestly, when I was a kid, the night race was my favorite,” Earnhardt said. “As a 12-15-year-old kid, this place was the ultimate playground. We enjoyed coming here. The racing has always been incredible. It is so special and unique — different than anything else we do and something I’m super proud of for the sport. It’s an incredible race track and has done so much for NASCAR over the years to promote the sport and give folks a great place to come and enjoy a race.”

Earnhardt will pull double duty this weekend — running the Xfinity Series race on Friday night and the Monster Energy Cup Series race on Saturday. In 2004, Earnhardt swept both events and collected one of his most cherished trophies.

“Dad won a handful of races here — had the trophies all in the house,” Earnhardt recounts. “When he built his log cabin, he had ‘em all up on a ledge — about a 10-foot ledge. They were all up there to the right of the fireplace. There are a couple of tracks on the schedule that have unique trophies and they haven’t changed, which I’m glad. And this is one of ‘em.

“For a while, the trophy was taller than I was. I’d been lucky enough to go to Victory Lane with Dad a couple of times — and that was the trophy I wanted. I felt really, really lucky to have gotten one. I don’t have many trophies in the house, but that’s one of them that I keep in the living room because when you win here, the driver is a big part of it. A lot of tracks, you need a lot of race car to do well. Here, you need a really good driver. And I felt lucky and fortunate to have gotten a victory here.”

As Earnhardt prepares to step out of the car, he's had time to reflect on the past and contemplate what the future might hold. Over the last decade, Earnhardt has developed the Dale Jr. Foundation which according to its mission statement is “dedicated to giving underprivileged individuals with a focus on youth, the resources to improve their confidence and education, and the opportunity to achieve extraordinary goals.”

It’s easy to understand why Earnhardt was so moved by the scholarship.

“My life has been too good to be true," Earnhardt said. "I’ve had so much given to me. I feel like this obligation to turn it around and do something for someone else. As I’ve gotten older, I’ve done more and more of that and I feel the joy from that. So I love to see that happen — and want to be a part of that more and more.

“So as we get more creative with our initiatives on our foundation and continue to understand our ability to reach people and impact communities and also impact the nation, you do that out of enjoyment and pleasure. So I get great pleasure and great return on that. It will be a great feeling.”

Furniture Row Racing takes over management of its pit crews

NASCAR Roundtable - Which bubble driver could win at Bristol?