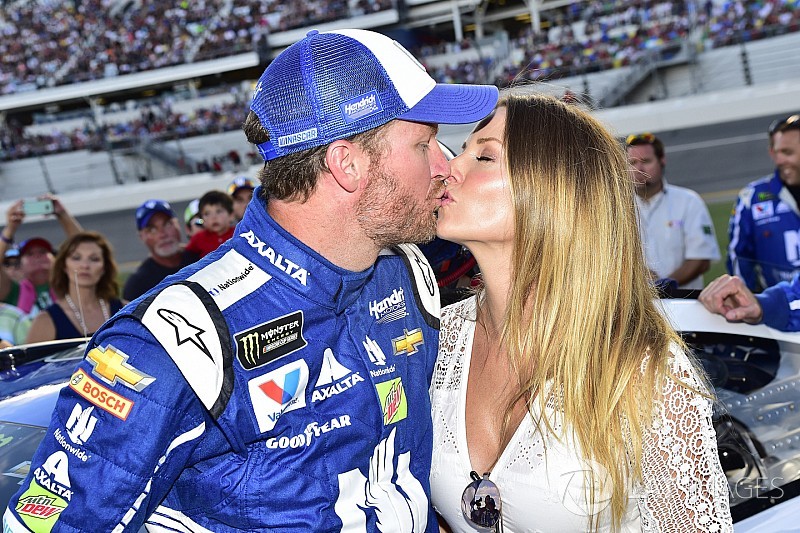 It’s a girl for Amy and Dale Earnhardt Jr.

Earnhardt posted a pair of pink Converse Chuck Taylor’s on his Instagram account with the news that the couple is expecting thier first child.

“Excited to share the wonderful news that @mrsamyearnhardt and I are expecting our first child. A little girl!!!! We are both thrilled and can’t wait to meet her.”

The couple was engaged on June 17, 2015 and married on New Year’s Eve the following year.

Earnhardt, 43, announced on April 25, that 2017 would be his last season of full-time NASCAR competition. He’s won 26 Cup races over 18 seasons. Earnhardt captured his 15th-career Cup pole on Saturday for the Alabama 500 at Talladega Superspeedway. Earnhardt also won consecutive titles (1998-1999) in what is now the Xfinity Series. In addition to driving the No. 88 Chevrolet for Hendrick Motorsports, he is also co-owner of JR Motorsports.

Earnhardt reflected on the big picture of life after racing during his media availability at Dover International Speedway last month.

“Amy has been a big influence on my life and changed me as a person in the way I think and see things,” Earnhardt said. “And I think has made me a more compassionate, nicer, thoughtful person and being out of the car as well last year for so much time gave me a whole new perspective on life and what things are important and what things might not be so important.

“I’m excited about getting out of the car and having time to do those type of things and spent more time around my family and friends. If you let it, racing can make you really narrow-minded, frustrated, hard to be around, difficult person to deal with and it did that to me for a very long time. I let it happen and certainly have learned from that over the years. So, I am excited to start a family. I hope that I’m fortunate enough to do that with Amy and we definitely want to do that.

“It will be weird not being a race car driver if I have a daughter or a son, I think about that too, will they even understand what I’m trying to tell them when I try to explain what I did for a living for a long time. Or maybe that doesn’t matter? I don’t know. A lot of things I’m probably thinking about don’t matter when you have a child, but I’m hoping to find out all that stuff here soon.”

One Ford philosophy pays off for Keselowski at Talladega

Doug Yates: "My dad would be very proud"