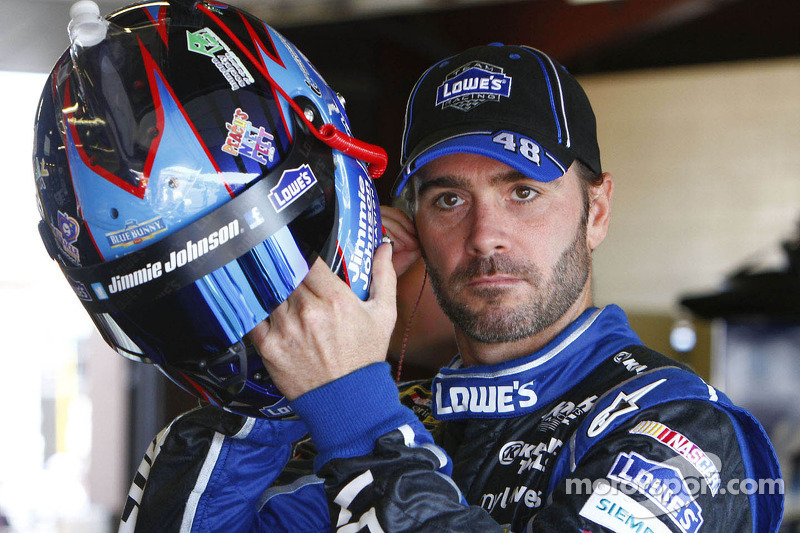 Roughly 22 minutes into Saturday's final practice at the two-mile track, Johnson spun in traffic entering Turn 3. His No. 48 Chevrolet SS nosed hard into the outside wall in Turn 4, damaging the car beyond repair.

The team immediately rolled out a backup car and began preparing it for Sunday's Pure Michigan 400. Because the car change occurred after Friday's time trials, Johnson will give up the third-place starting position he earned during qualifying and drop to the rear of the field for the start of the race.

Johnson's primary car came to rest in the infield grass, the splitter buried in the turf. After a quick trip to the infield care center, the five-time champion was back in his garage stall, describing the wreck to crew chief Chad Knaus and lending moral support to the team.

But that was the least of Johnson's worries. Of more concern was determining why the car stepped out into the third corner.

"It just got loose," said Johnson, who was third fastest in Saturday's first session and fastest in Happy Hour (before the car change). "It was definitely unfortunate, because that was a very fast race car. We always bring fast race cars to the track, and we'll get this one (the backup) tuned up.

"I'm noticing that we've got the wrong paint job on it. So we'll figure something out -- I'll either change driver suits, or we'll put a wrap on it. I just hate that I'm putting this work load on my crew guys, but they're ready for the challenge, and we'll be just fine come Sunday afternoon."

Between practice sessions, the track got warmer, and handling characteristics of the cars tend more toward the loose side.

"That's definitely part of it," Johnson said. "I'm a little puzzled as to why I spun out going in, because I've had great entry stability, and even on that run I had great entry stability. I got a little close to the 27 (Paul Menard), but then again, it's not like I was right on him. To me it felt like I lost downforce just from a traffic scenario, but I'm not real sure.

"Either way, we've got a torn up car, and we'll have to work hard to get this one ready to go and hopefully make a couple of laps before the session's up and take it from there."

In fact, Johnson's team had the backup car for action with enough time left in Happy Hour to run 10 laps.

NASCAR racing is not as easy as it may look