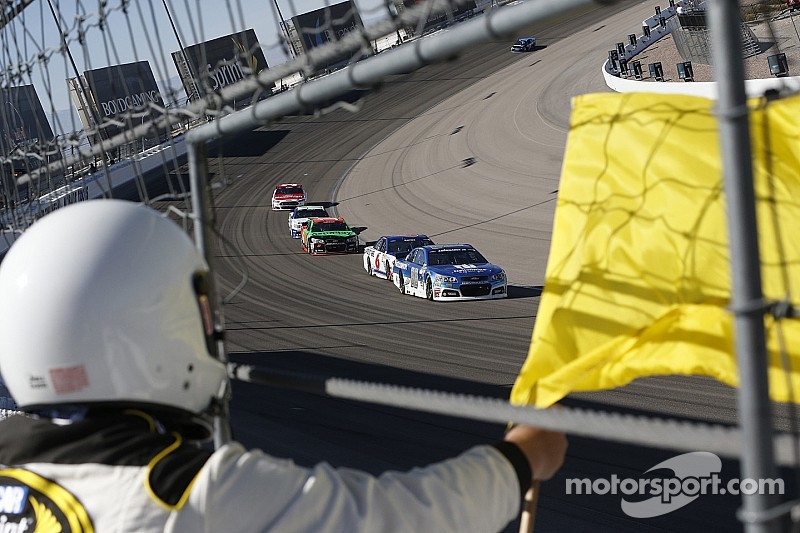 A (no) cautionary tale from Talladega.

BIRMINGHAM, ALA. — Sunday’s Sprint Cup race at Talladega Superspeedway ended with Dale Earnhardt Jr.’s return to victory lane for the first time since 2004 at the 2.66-mile track.

But as the No. 88 Hendrick Motorsports Chevy led the field for the final lap, two accidents occurred behind him— one with Carl Edwards, who was punted by Casey Mears and a second incident with Jeff Gordon, Ricky Stenhouse Jr. and others.

We were driving past wrecked cars for half a lap at 180 mph – it was a crazy ending.

“I thought we had a great run and then Casey Mears just spun me out going into (turn) one,” Edwards said. “That was frustrating. I was driving down here and I thought we were going to have a good run and I thought we’d get a top-five and as he pushed and pushed I was just hoping he would let go.

“I tried to save it…There were people going by 100-plus mph and they never checked up. I really think that’s the most dangerous thing in the sport right now at these places. When there’s a wreck, guys have to get on the brake or we’re going to have a lot of problems here. We don’t want to see that.”

Edwards was surprised by NASCAR’s decision not to call a caution as cars continued at over 190 miles per hour. He was also disappointed with finishing 32nd.

“I really just got spun out and I know everybody is trying really hard and that’s what this racing produces,” Edwards said. “I was just really frustrated that I could spin out for a quarter mile over there and there are still people going by wide open.

“Really, NASCAR does such a great job making these cars safe and these tracks safe that the biggest cause of injury is going to be one of us not checking up when there’s a guy sideways. I mean, I have my door facing the field and the 51 (Justin Allgaier) car I think it was went by at about 160 or 180 mph. That’s just not the way I try to race these guys when there’s a wreck.”

Kenseth 'dumbfounded' at lack of caution

Matt Kenseth, Edwards’ JGR teammate, was one of the drivers that indeed checked up — but he was baffled by his peers that didn’t.

“There was that wreck at the end and I had to lift so I didn’t send Carl to the hospital,” Kenseth said. “I’m just dumbfounded that NASCAR didn’t throw a caution. We were driving past wrecked cars for half a lap at 180 mph – it was a crazy ending.”

If we would have thrown the yellow, then it’s already too late because he’s already up and across the track. We elected to let it play out.

On the final lap, NASCAR’s stance is to ‘let ‘em play”. When NASCAR Senior Vice President Steve O’Donnell joined SiriusXM NASCAR Radio he acknowledged that while Sunday’sdecision in the Geico 500 was indeed “a judgment call,” fans prefer to see races end under green flag conditions.

Finishing under green for the fans

“It’s going to be a judgment call,” O’Donnell said. “We’ve stated that we’re going to make every effort to try and finish a race under green conditions — that’s what the fans want to see. But we have to be obviously mindful of what’s occurring on the track. It’s a split-second decision.

“I think if you go back to Daytona, where we saw a driver hit the wall at what we thought to be fairly hard and wanted to dispatch our emergency crews quickly, we elected to throw the caution. If you look at yesterday, if you saw the circumstances that played out with Carl, when we initially saw him get loose, he was down on the apron. As we made that quick decision, it was ‘ok, he’s clear we can go’. Just as we make that, his car slides up the track and that’s something you don’t want to see green or yellow flag conditions.

“But at the time, if we would have thrown the yellow, then it’s already too late because he’s already up and across the track. We elected to let it play out. We certainly didn't like to see how Carl come across the track but ultimately, we were able to come back under green flag conditions.”

O’Donnell plans to discuss Talladega with the drivers. He also realizes that some fans might feel that NASCAR was late to make a call due to who might or might not be leading a race at the time. However, he reiterated that the sanctioning body reacts no differently than an umpire calling balls and strikes in baseball.

O’Donnell also addressed the new qualifying procedure for restrictor plate time trials that was instituted for Talladega last weekend. He says the “intent was to stick with it for the year” at the remaining races at Daytona and Talladega and then review the format in the off-season.

This is a test…this is only a test.