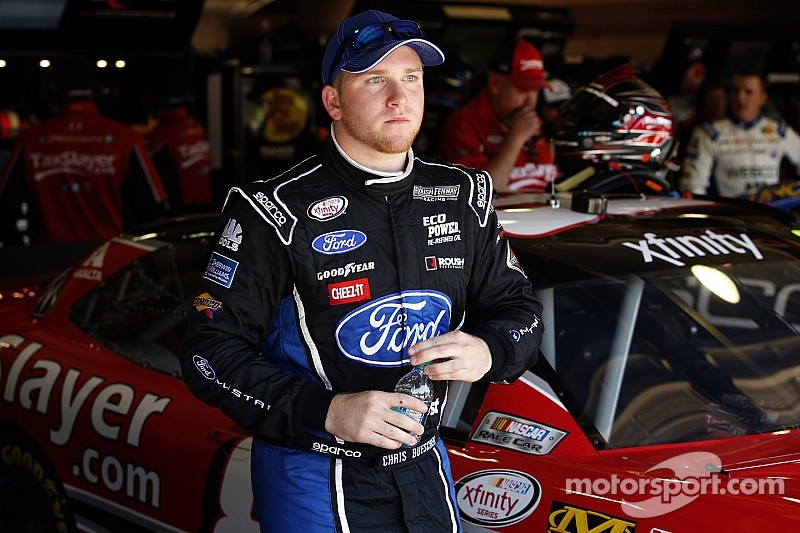 From the stands to the cockpit, hard work pays off with Sprint Cup opportunity for Buescher.

FORT WORTH, Tex. – Chris Buescher’s seat at Texas Motor Speedway will be quite different this weekend.

Instead of sharing a space with his parents in the grandstands, the 22-year-old Prosper, Texas native will be behind the wheel of the No. 60 Ford Mustang in Friday’s XFNITY Series race on Friday night and subbing in the No. 34 Ford for Front Row Motorsports in the Sprint Cup event on Saturday.

But it was a long road from the Lone Star State to North Carolina where Buescher knew he had to establish roots in order to succeed in NASCAR. Unlike most drivers, Buescher does not hail from a racing family. His father was a “car guy who built hot rods” but instilled a strong work ethic in Buescher.

Inevitably, it was Buescher’s hard work and determination earned him a roof over his head whether it was with David Ragan’s parents or on the couch of Roush Fenway Racing crew chief Matt Puccia.

“They helped me get in the door at Roush and helped me early on,” Buescher said of the Ragans. “My parents weren’t able to really uproot the family. I have two little sisters at home that were pretty heavily involved in school activities and gymnastics and other things. But it worked out pretty well. I owe them quite a bit. They took care of me.”

Despite the Ragans’ assistance early in his career, Buescher doesn’t believe David influenced Front Row Motorsports’ decision to hire him for the Auto Club 400 at Fontana. After Ragan temporarily vacated the No. 34 Ford to fill in for Kyle Busch, who is recovering from injuries in the Daytona XFINITY Series race, Brett Moffitt was recruited by FRM. But when Brian Vickers was sidelined with blood clots, Moffitt returned to Michael Waltrip Racing and Buescher received the call.

“I think what it came down to is, it was so last second, they just needed to find another Ford driver with the credentials that could get approved to run the Cup race,” Buescher said. “We even had to go through Brett Bodine to get approval before we could get a license – or upgrade to a cup license. It was a wild morning going through all of that.”

The selection paid off. Buescher finished 20th in his Cup debut and outran two of his veteran Roush Fenway Racing teammates. While Martinsville Speedway was a bit of a struggle in his first start on the half-mile, Buescher hustled the car to a 24th-place finish – one laps off the pace and one position ahead of FRM teammate David Ragan.

Front Row management is so pleased with Buescher’s progress that he’s been asked to race at Bristol Motor Speedway next weekend and Talladega Superspeedway on May 3.

Puccia, who is currently the crew chief for Roush’s No. 16 Cup team, says Buescher reminds him a lot of Carl Edwards when he was younger.

Chris has a lot of natural talent. He’s for sure on the same level as Carl was at this age.

“Chris has a lot of natural talent. He’s for sure on the same level as Carl was at this age.”

Getting up to speed

With the changes NASCAR made to the Sprint Cup cars this season, along with the reduction of horsepower, Buescher finds the feel to be comparable to both the XFINITY and ARCA Series rides.

Buescher believes the similarities between the current models and the time he was able to spend testing the Cup cars for Roush in the past have helped expedite his learning curve.

We were running almost identical lines around the racetrack – at least I was anyway, just getting used to a whole lot more downforce – really not a whole lot more power but just enough to feel the difference.

“It was pretty surprising how similar it was to our XFINITY cars now,” Buescher said. “I never ran any trucks so I don’t have anything to compare it to there, but I remember the ARCA Series, before they were putting the spacers on those motors, they were making almost as much horsepower as a Cup car back then. And that was a lot of power. Since then, everything I’ve been in has had less.

“So it’s nice to be able to have that power again. It’s almost a way to make up for mistakes. If I pinched myself a little bit, I was able to hit the throttle and pull myself out of it and get my momentum back a lot quicker. It’s really nice.

“The momentum you have to carry in that series right now, I don’t know how they were before, but now it’s a very similar feeling to the XFINITY side. We were running almost identical lines around the racetrack – at least I was anyway, just getting used to a whole lot more downforce – really not a whole lot more power but just enough to feel the difference.”

Buescher has made tremendous gains on the XFINITY side, where he’s currently second in the point standings under the direction of Scott Graves. After a limited run in 2011 and 2013 where he worked on the interiors his own race cars, Buescher ran the full season last year. He says that building the cars “makes you want to take care of your equipment a little more so it’s there the next weekend.”

Although Roush Fenway Racing has struggled on the Cup side this season, Buescher and his NXS teammates have had some of the fastest cars in the field.

“I’m proud of our XFINITY Series effort – not just this year, but the last couple of years,” Buescher said. “Our crew chiefs, our teams have worked really well together. Our teams share every bit of information we can to work toward a common goal.

"I think our new teammates this year - with Bubba (Wallace) coming on board, Elliott Sadler is a guy with so much experience, he really pushes us to work towards that one goal and help us work together as we progress. It's been really good for us week after week. We still have some room to grow but we're a lot better than where we started."

While Buescher has held his own against some of NASCAR’s top stars in the XFINITY Series, the realization that he was driving a Sprint Cup car happened early in his first start at Auto Club Speedway.

“It was passing Jeff Gordon on a restart,” Buescher acknowledged humbly. “The first 50-75 laps, it was just a matter of getting used to it. We were running 30th to 35th. As we got better and the guys made good adjustments on pit road, we got a lap down, got to take the wave around, got back on the lead lap and somewhere midway through the race, we got to a restart, we were on good tires and I drove by a bunch of the Cup guys that I grew up on the couch watching on Sundays back home in Texas.

“When I passed Jeff Gordon that was the moment. That was the guy I had followed since I was eight years old. It was awesome. It didn’t take him a whole lot of time to get us back, but that was cool.”