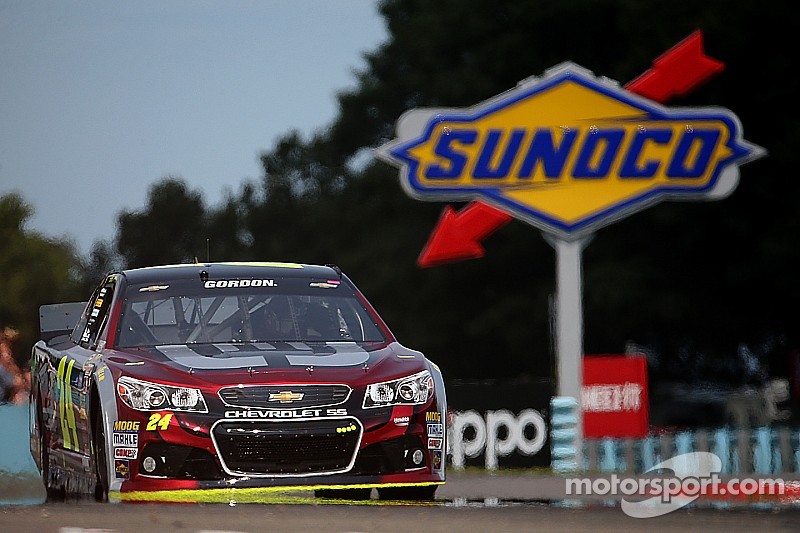 Jeff Gordon: Today is Leo’s (son) birthday and I told him on the phone earlier that I was going to go try to get a pole for him

“Oh gosh, I am so proud of this pole, and the effort the this Drive To End Hunger team put in this weekend, as well as that lap. Qualifying has really been what has been hurting us a Watkins Glen, and I blame myself really. I’m so happy that I got three shots at it today. I really think that made the big different. The first lap I did okay, but I got held up a little coming back to the checkered.

The second one was a really good lap and got us into the top-12. I just tried to do the same things in that last lap. Alan (Gustafson crew chief) made a slight adjustment. I thought it was about the same as what I ran before, I didn’t think it was going to be that much better. Wow what a lap. I’m so excited. Today is Leo’s (son) birthday and I told him on the phone earlier that I was going to go try to get a pole for him realistically thinking I had a shot at it.

We were going for it and we got it done.  Happy Birthday Buddy. I’m pumped, this gives us a lot of confidence. I think today does make a statement, We didn’t do too much in qualifying runs. Just the way we struggled here in the last couple years. This has been one of our toughest tracks, then to start the weekend off with a pole. Heck yes!  We’ve got real possibilities with the Drive To End Hunger Chevrolet. After today, I believe anything is possible.”

WHAT DOES THIS POLE MEAN TODAY?
“That was huge.  That was huge.  We made several qualifying runs yesterday and really struggled.  We have been struggling here qualifying these last few years.  It’s had a lot to do with our poor performance here at Watkins Glen.  I didn’t think we had that in us.  I really didn’t.  Well I should say I knew the car had it in it.  I didn’t think I did.  I honestly was missing a few marks out there.  That last lap I just hit all the corners really well and learned what I could from the previous laps with our Drive To End Hunger Chevrolet.  I’m so proud.  Today is my son’s birthday.  There is no doubt this is for his birthday.”

“Very fast race car. We unloaded strong and found something really good for race trim.  It didn’t work so well yesterday for us in qualifying trim. We were still eighth on the board, but a pretty good gap from where we were up to the front.  The No. 88 car had a great lap so we really copied the No. 88’s qualifying set-up.  It had a lot of speed. So a big thank you to Steve Letarte and Dale, Jr. for a fast set-up under the car that extra little bit to get us up there in the top five.  Things were much different in the car and on my lap in the second session.  I was trying to mimic little traces and lines I had seen on the data from Junior’s lap.  I had a mistake into turn six so I regret that a little bit, but still with the mistake a real good starting position.”

“I didn’t really put a whole lap together. The car was really good and just didn’t get everything out of it that I needed to get the pole. Still a solid effort by our Budweiser team and a really good starting position. From there we should be able to hopefully race up front all day.”

“It was a nice qualifying session today with the adjustments we made overnight we put ourselves in contention to be in that final elite group.  We had to make a second outing when we were right on the bubble.  We were 11th at the time.  We did get bumped to 12th when we took our green flag.  We would have stayed 12th, but it was like we were buying insurance.  Sometimes you don’t need insurance, but it’s good to have it.  Yet we still picked up on our third time out.  That was the good thing that we kept laying down good lap times.  The car is solid.  Were we a pole sitting car?  Maybe, but we were in position, we have a top-five starting spot and that is what you come here to do on Friday and Saturday, now it’s race time.”

ON HIS WEEKEND SO FAR AND HIS QUALIFYING LAP:
“I just never hit a lap.  Just disappointed with myself.  The weekend has gone alright.  I think we need to keep improving a little, just little things.  I think the car is fast.  Pole would have been nice, but more than anything just disappointed that I never felt like I nailed a lap.  I don’t know if I could have run what Jeff (Gordon) ran, but I didn’t give myself a shot at it.”

“Real happy we are happy with how the car has got real good speed.  I was real disappointed because we lost all our brakes on that last run.  They cooked in between the sessions and didn’t have a brake pedal on any of the straightaways and really had to do a lot of pumping on the brakes.  Like coming out of (turn) 10 and going into (turn) eleven it would be going to the floor in just that little bit of stretch there.  We learned a little bit of a lesson on that and won’t let that happen again. But the car has amazing grip, great speed.  We have been real happy all weekend and so just appreciate my guys working so hard and putting such a good car out there.  I feel lucky to be able to drive it.  I haven’t really had to try to find any speed myself or help them sort out anything on the car balance wise.  They unloaded a real fast car and I’ve been learning how to drive it and just getting better and better the longer the weekend goes like we usually do at these places.”

ON FANTASY FOOTBALL DRAFT FOR CHARITY:
“I was the fifth pick, and Peyton Manning was still on the board, and I felt like I had to take him. That late, I didn’t think he would still be there. I got some good running back regardless.  I like my team. We raised  a good amount of money for the “Jimmy V Foundation”. We auctioned off one spot in this leagues, and one fan spent over $7,000 for it.  We have a lot of drivers that are pitching in that I have to thank: Denny Hamlin, Regan Smith, Kevin Harvick, Matt Kenseth, Jamie McMurray, Chase Elliott, the Dillon Boys (Austin and Ty) – just a lot of guys that pitched in their time to be part of this to raise a lot of money, so I want to thank them too. ”

TONY STEWART, 14 RUSH TRUCK CENTERS/MOBIL 1 CHEVROLET SS – QUALIFIED 13TH
“This is such a momentum race track that you can gain or lose that really easy.  With all the corners they’ve got here and braking centers you can get that really easy and not even know you did it.  We picked up from our first run.  Ran a 15 our first run and then ran that 79 definitely picked up for sure, just didn’t pick up enough.”

“I thought that we would be a little bit better than that.  We were eighth or ninth in practice yesterday so you know you are going to be close to advancing or not.  Just didn’t put the whole lap together.  Road course racing is a lot of fun, but it’s hard to put an entire lap together.  I certainly have done much better qualifying at Sonoma than I have at Watkins Glen.  But we have a good car, just will see what tomorrow brings.  Tomorrow is probably the most eventful race in Cup that we have all year long.  Just the craziest stuff happens at this track every year so you just wait and see what cards you are dealt.”

ON HIS QUALIFYING RUN:
“It wasn’t that bad of a lap, I wish we could have been a little bit quicker, I thought yesterday in relation to the field, we were faster than where we ended up. I was just a little bit too loose, and we made a transmission change yesterday. I couldn’t time out my corner, and it is so important here to roll the middle, I just needed a couple more laps to get used to what we have. We have a pretty solid car. We unloaded pretty good; same car we ran well with at Sonoma. I am looking forward to tomorrow’s race, it should be a lot of fun.

“Coming here to Watkins Glen is always so much fun.  The guys here at HScott Motorsports have done a great job.  When you can drive a race car like this and you can go out there and have that much fun it’s definitely a good day.  I didn’t expect my best qualifying effort to come on a road course.  I’m not going to lie.  Super proud of these guys.  We got a great lap there.  I was bummed we didn’t make the top 12, but all in all a solid effort.  I think we have a good Brandt Professional Agriculture Chevy for the race tomorrow. I’m looking forward to it.”

NASCAR notebook from The Glen: Allmendinger learning to be patient