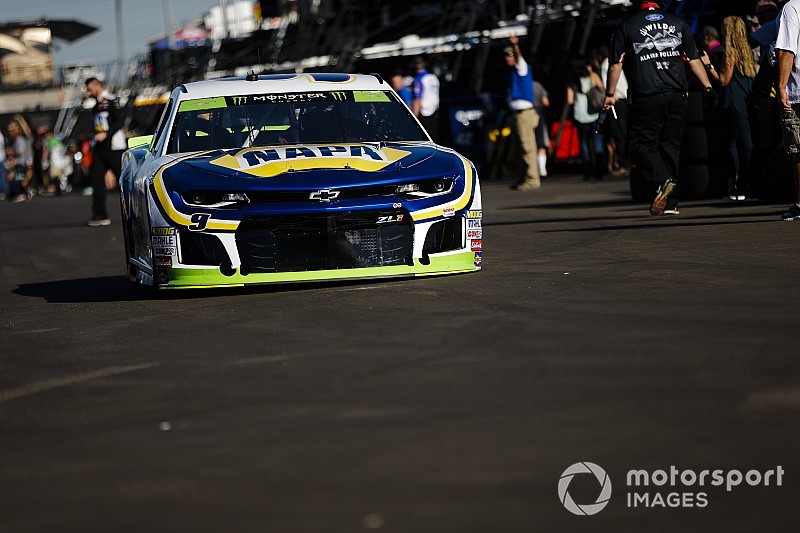 Harvick, the pole-winner, had led every lap of the stage before Elliott ran him down for the led but his trouble wasn’t over yet.

Right after the pass, Harvick slowed on the track and took his No. 4 Ford down pit road with a flat right-front tire.

Through the first 10 laps, pole-winner Harvick led the way and built up a nearly 1-second lead over Elliott with Blaney running in third.

With 50 to go in the first stage, Harvick maintained a slight advantage over Elliott as Blaney remained in third.

Menard, who had started from the rear of the field, fell a lap down early and appeared to be running on seven cylinders.

With 30 laps remaining in the stage, Harvick still managed an almost 1-second lead over Elliott as both navigated lapped traffic. Blaney remained in third, Kyle Busch was fourth and Hamlin was in fifth.

Clint Bowyer tagged the wall twice in Turn 4 with about 20 laps left in the stage. His No. 14 team was going to have pictures taken to ensure there was no serious damage.

With 10 laps left in the stage, Harvick continued to hold a steady advantage over Elliott. Blaney remained in third, Hamlin in fourth and Keselowski moved into the fifth position. Joey Logano – already locked into the Homestead series finale – was dropping back through the field and running 21st.

Both Menard and Cody Ware had to start the race from the rear of the field after both had to move to backup cars over the weekend.