Chase Elliott thought he “could root (Keselowski) out of the way” 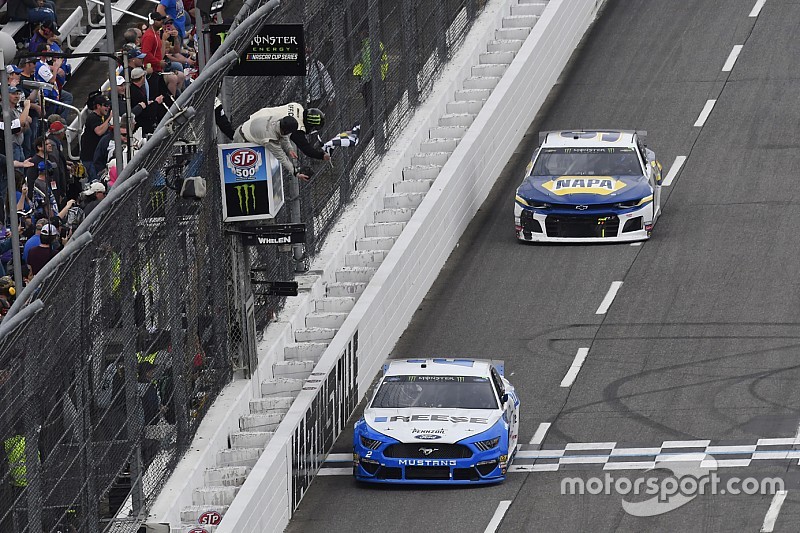 Chase Elliott turned out to be the only driver Sunday to pass race winner Brad Keselowski under green-flag conditions.

While he had chances at grabbing the win - including at one point leading 49 laps - Elliott’s runner-up finish in the STP 500 was still special. It was his first top-five since his win last fall at Kansas and the first top-five of the year for Hendrick Motorsports.

As Elliott rode around the track during his cool down lap, team owner Rick Hendrick came over the No. 9 team radio and said, "Great job today guys. Great job Chase." Elliott was the only Chevrolet driver to finish in the Top 10 on Sunday.

Elliott said he felt he had a car good enough at times to pass Keselowski but needed just a little bit more to secure the win.

Elliott able to close into about a car length of Keselowski after the final caution of the race lt like his car was just a tick off.

“It was about who strung together two corners lap after lap after lap. I felt like we were really close to him and at times a little better.”

After the last caution set up 45-lap sprint to the finish, Elliott tried to make some changes in his line to try and catch Keselowski.

“I tried to move up (the track) and get some runs,” Elliott said. “I moved up with about five to go and was making a little time but obviously not enough time. I was just trying to get back to his bumper and thought I could root him out of the way.

“It was going to be really hard to drive up to him and pass him. I was going to have to get to him bumper and play some games and hope it went my way.”

Although he didn’t win the race the the strong run was satisfying in giving his team its best finish of the season.

“We had a really strong car and the best shot we had to win to date this season,” said Elliott. “So when you have cars like that (today) you really need to capitalize.

“Coming back here in the fall I hope we can run like we did today and even a little better and be a part of the deal to make it matter.”

Kyle Busch: Third is better "than we probably should have had"

Clint Bowyer on Martinsville rally: "We kept beating ourselves"