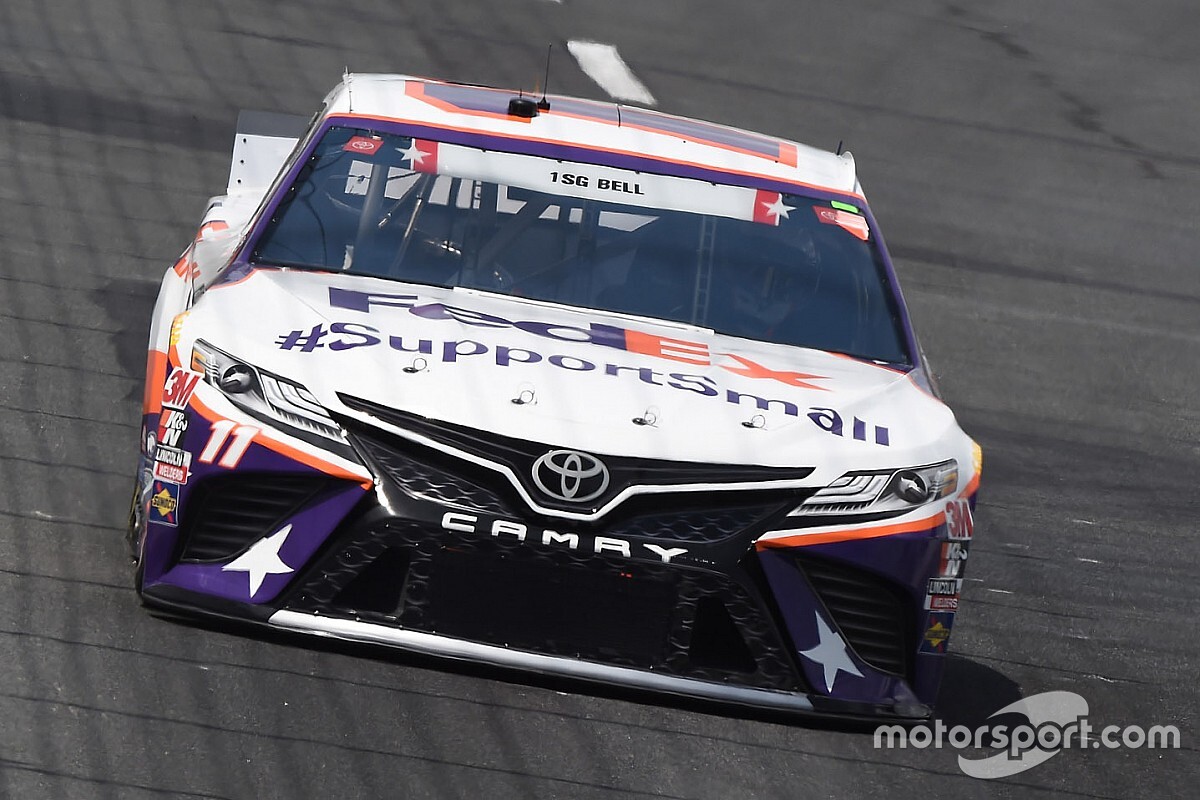 A runner-up finish at Charlotte Motor Speedway was a welcome reminder for Denny Hamlin that despite recent struggles, he and his Joe Gibbs Racing team remain on the right path.

Hamlin had to compete Wednesday night without crew chief Chris Gabehart and two other team members, who were all suspended four races after two large pieces of ballast fell of Hamlin’s No. 11 Toyota prior to the start of last Sunday’s Coca-Cola 600.

Replacing the ballast on Sunday dropped Hamlin eight laps off the pace and out of contention for that win, which in turn left him with a poor starting spot (29th) in Thursday night’s rain-delayed Alsco 500k at Charlotte.

Hamlin never led a lap Wednesday night but by the end of the race his No. 11 Toyota was in the hunt for the win and finished two seconds behind race winner Chase Elliott.

“Every time we go to a race track the second time, the results are amazing. We’re making the right adjustments, we’re doing the right things,” said Hamlin, who won the season-opening Daytona 500.

“That’s good because the end of the year in the playoffs you’re going back to race tracks for the second time, and that’s when we need to run well, and that’s what got us to the final four last year.

“I like our chances. I think even though we’re still maybe off a little bit with our organization on speed, I think that we’re still getting good finishes out of it, and we’re weathering the storm until we can get our stuff a little bit better.”

The condensed schedule and short turnaround time since NASCAR restarted its season on May 17 has presented its own challenges and with the suspension of key team members, Hamlin said the situation has just been more difficult.

“It’s still a big penalty. It still cost us a lot, a chance to win, I can assure you of that,” he said. “We had a much faster car here on Sunday than what we did (Thursday night), and the results were still good.

“We’re definitely going to miss Chris, but also within our roster we’ve left engineers at home, so now if anything he’s able to be at the race shop with the engineers and coming up with decisions in not such a chaotic environment like a race track.”

The one-day race format utilized by NASCAR as part of its social distancing and medical screening protocols has likely been a benefit to his team, Hamlin said.

“If we had practice and qualifying and had to make some quick decisions during practice, certainly, it would definitely hurt,” he said. “But I think just under these unique circumstances that we’re in, it doesn’t hurt as bad.

“But like I say, if the penalty was bad enough being nine laps down after nine laps of the Coke 600, a race that I’ve been marking on my calendar for years now trying to win. That part of it stinks, but I’m glad that we’ve got the depth to still go out here and run good.”

Keeping up with HMS

While JGR may not have the speed right now of Hendrick Motorsports, Hamlin still has shown the competitiveness necessary to once again be a contender for the series championship.

Through eight races, Hamlin has one win, four top-five and five top-10 finishes and is currently eighth in series points.

“We can gripe about what we don’t have all the time, but essentially it’s days like today for us where, A, maybe we didn’t have the best car, but we optimized our day, we got the best finish we possibly could, and that builds some momentum,” he said.

“Like I said, we’re weathering the storm until we’ve got lights-out, lightning-fast cars and we don’t have to start 29th in a 300-mile race."