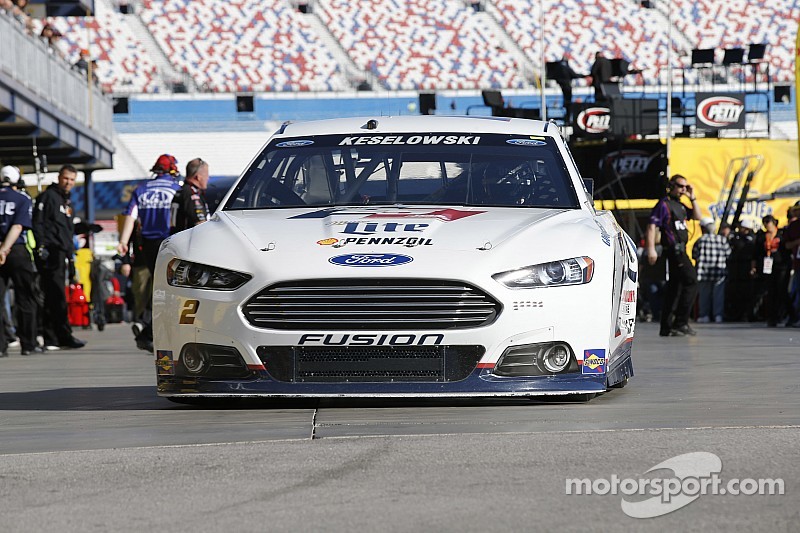 The Nos. 2 and 51 Sprint Cup teams were found in violation of the NASCAR rulebook at Las Vegas Motor Speedway.

Brad Keselowski’s team defied NASCAR’s pre-season edict not to pull out the side skirts on the cars during competition. After the No. 2 Ford cleared pre-qualifying inspection on March 6, officials discovered the right and left rear quarter panel wheel openings were flared on the car while awaiting time trials. The team was forced to return to the inspection bay prior to first round of qualifying.

In addition to Sec. 12.1: 12.1: Actions detrimental to stock car racing; NASCAR cited the No. 2 Team Penske crew with violating Sections “20.4.b: Body – All approved OEM-manufactured body components must be used as supplied except as required to stiffen, or to attach to other vehicle components. Tolerances from CAD surfaces and template tolerances are provided to allow for manufacturing, fabrication, and installation variability;

“20.4.2: Surface Conformance – Coordinate measuring machines, scanning equipment, and templates, among other tools, will be used to inspect body surfaces for conformance to the approved OEM and NASCAR CAD files.”

NASCAR defined the infraction as a P2 penalty and place crew chief Paul Wolfe on probation through Dec. 31.

Justin Allgaier’s No. 51 HScott Motorsports Chevy was found to be too light in post-race inspection on Sunday as a result of the team not sufficiently securing ballast to the car. The ballast was report on the track during the Kobalt Tools 400.

“a. Any and all ballast added to the vehicle must be bolted inside an added ballast container, inside the main frame rails, and/or inside the front sway bar.

“b. Added ballast must be secured in a manner that will prevent movement of the ballast during an event.

“b. After a vehicle has raced, only water in the radiator, oil in the engine reservoir tank, and fuel in the fuel cell may be added. Wheels and tires may not be changed, unless otherwise authorized by NASCAR Officials.

The P3 Penalty carries a $25,000 fine for crew chief Steve Addington, however the NASCAR release did not mention any form of probation.

“The No. 51 experienced a malfunction during the Kobalt 400 at Las Vegas Motor Speedway that resulted in a P3 infraction being assessed to the team by NASCAR.  The issue was unintentional and we regret its occurrence. Going forward, we have implemented additional procedures to ensure that we do not have a repeat incident.  We accept NASCAR’s penalty and fully support its efforts to keep the sport as safe as possible for competitors, officials and fans.”