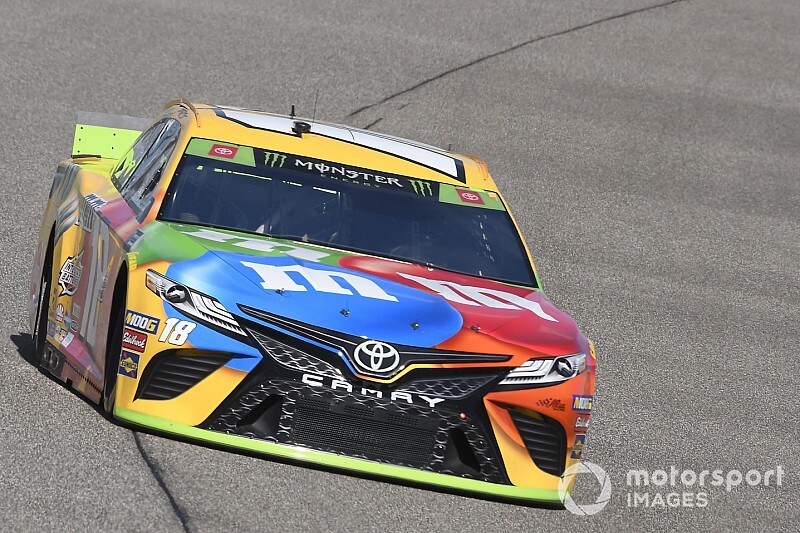 Kyle Busch passed Kevin Harvick with two of 80 laps remaining and held on for the Stage 2 win at Homestead-Miami Speedway.

Following the break between Stages 1 and 2, all of the lead-lap cars elected to pit with Truex the first off pit road.

On the restart on Lap 87, Truex was followed by Kyle Busch, Larson, Hamlin and Harvick.

Kyle Busch briefly grabbed the lead on the restart only to see Truex came right back and reclaim it.

On Lap 90, Kyle Busch had dropped to third and Hamlin and fallen back to sixth.

After a fierce battle, Harvick finally got around Kyle Busch to take the third spot on Lap 96. Busch reclaimed the third position on Lap 98.

Harvick for the position back on Lap 103 as Truex’s advantage over Larson moved to 2.1 seconds. Kyle Busch again retook the third position on Lap 105.

Busch got around Larson to move into the second position on Lap 109 as Harvick dropped to fourth. Hamlin remained in seventh.

Hamlin was the first of the championship contenders to make his green-flag pit stop on Lap 118 for tires and fuel to make it to the finish of the stage. Kyle Busch was next.

Harvick elected to pit on Lap 120 and Truex was quick to follow.

Once the cycle of stops was completed on Lap 121, Kyle Busch came out as the leader followed by Larson, Truex, Harvick and Johnson. Hamlin ran sixth.

Truex came down pit road again on Lap 123 as it appeared his team had put each of the car’s front tires on the wrong side of the car during his stop.

After returning to the track, Truex ran 13th, the first car one lap down.

With 30 laps remaining in the second stage, Kyle Busch held a more than 2-second lead over Larson. Harvick was third and Hamlin fifth. Truex continued to run in 13th, one lap down.

John Hunter Nemechek spun off Turn 2 on Lap 136 to bring out a caution and Truex was beneficiary of the free pass, which put him back on the lead lap.

All of the lead-lap cars elected to pit and Kyle Busch was the first off pit road followed by Harvick and Hamlin. On the restart on Lap 143, Busch led the way while Truex restarted in 13th.

Harvick powered to the inside of Busch in Turn 3 to take the lead on Lap 144.

With 10 laps to go in the stage, Harvick had moved out to a more than 1-second lead over Kyle Busch. Larson was third, Blaney fourth and Hamlin fifth. Truex had moved up to seventh.

Truex got around Hamlin to move into the top-five on Lap 154.

Helped back lapped traffic, Kyle Busch got around Harvick to retake the lead on Lap 158.