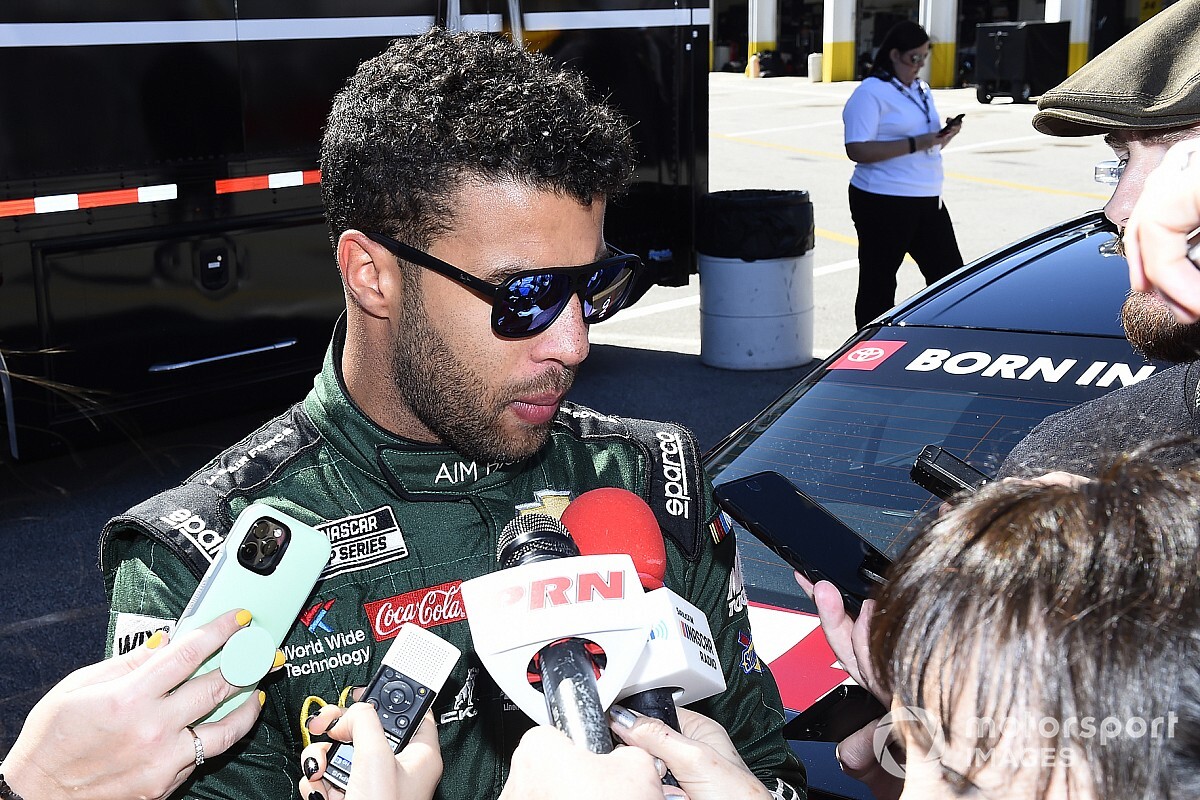 NASCAR’s only African American driver in its Cup Series, Bubba Wallace, has called upon his peers to join him in being more vocal about racial injustice, saying “the silence from the top drivers in our sport is beyond frustrating”.

Wallace made an impassioned, one-hour guest appearance on the Dale Jr. Download show on NBCSN this week, where hosts Dale Earnhardt Jr. and Mike Davis discussed with him the issues associated with the murder of George Floyd while in police custody in Minneapolis. All four officers involved in his death have since been fired and charged.

During the show, Wallace gave his own account of an incident where he was stopped by police while his car was searched.

“I was stopped [on the road] and I was told to get out of my car to have it searched,” said Wallace. “I had just got my car cleaned, and I’d had a race-winning check just cashed, and I’d had all that money in my car. But I had taken it out when we cleaned it. So imagine if the money was still in there.

“Guns were drawn. They weren’t pointed at me, but they were out of their holsters and ready to do something. That moment, being pulled out in front of, and turning on your hazards, it’s a sign that you’re slow and I need to go around you. But when it’s undercover cops, you can’t do that. And when it’s tinted windows, they don’t know what to expect so they’re ready for anything.

“So, one wrong move, I wouldn’t be talking to you today. And it’s the comments they made towards me that pissed me off the most. ‘Can you afford this car? This is a nice car.’ And I said, ‘Yes Sir, I can.’ And I wanted to say more, but one wrong move, because I’m black, coulda had me on the pavement saying ‘I can’t breathe’.”

Wallace said he’s been encouraged by a few of his fellow drivers speaking out on the subject of racial injustice, but believes NASCAR’s biggest star names could do much more to keep the issue in the spotlight and speak directly to their fans.

“As pissed off as I am internally, every conversation I have had I’ve felt better about the direction in which our sport is heading, but still a long way to go,” he said. “I sent out my message about the George Floyd incident, and other drivers chimed in – Ty Dillon, Tyler Reddick, Jimmie [Johnson] and I saw they asked questions after the race. I was like, wow, alright, it’s stepping up, I think Clint [Bowyer] mentioned something there too.

“I was so mad after the race, just because there wasn’t more of that from some of our peers, our competitors. The conversations I had with Ty really fired me up, in a positive way, to get my message across. So I sent a message to the drivers, and the high-ups in NASCAR, and Dale you’ve been a part of that text chain, and I can go back and read it…

“I said, ‘A few drivers, very few, have given their opinion on the day’s matter – [his girlfriend] Amanda and I appreciate that. But the silence from the top drivers in our sport is beyond frustrating. Our sport has had somewhat of a racist label to it. NASCAR… everybody thinks redneck, confederate flag, racist – and I hate that. I know NASCAR is so much more. D’yall not care about what’s going on in the world? That’s not the right way to go about it.

“I said, ‘Our voice carries so much more weight than Joe Schmo from down the street. I mentioned we have to do better, and encourage everyone to say what they feel. At the end of the day this is way more important than any race win or championship that you’ve ever accomplished. This is something that can change on a global impact.’

“I get that we have to worry about sponsors and teams, all that stuff, but that has shifted for me. Maybe I’m wrong for thinking about this, but I don’t give a damn what anybody says, I’m going to get my message across on how I feel. And what I think needs to be changed in this world to make it better for everyone to be included.”