The No. 55 raced well in the first two races of the 2014 season, but with little result.

The No. 55 raced well in the first two races of the 2014 season, but with little result. A multi-car accident at Daytona and a melted tire bead at Phoenix damaged the car leaving Vickers with 30th and 25th place finishes. 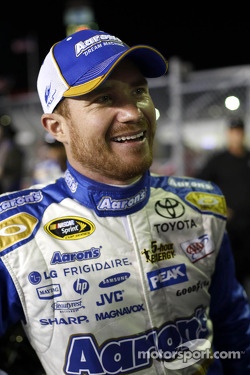 BRIAN VICKERS ON LAS VEGAS: “It’s been a few years since I have raced at Vegas in a Sprint Cup car. I think because of the progressive banking it should be a little easier to pass than it was at Phoenix. But how much is debatable. I think you will see a good race.”

VICKERS ON WHETHER IT IS GETTING HARDER TO PASS DURING RACES: “I don’t buy into the whole racing has gone bad because of aero. Aero has always been there. I don’t know what people are talking about. I have been watching races for 20 years and I don’t ever remember the competition ever being this good. Aero has always been there it’s not like it just got invented five or 10 years ago. I think the reason you are seeing less shuffle on long green flag run is the tires don’t fall off as much. The reality is that the competition is closer than it has ever been. During practice the top 30 guys running by themselves can run with a tenth of each other. How am I going to pass someone when we are running the same lap times? I think as a sport we chase parity so much that we have accomplished it. The cars are so even and the box is so small that you could take the bodies off and the reality is that I am going to still have a hard time passing someone when I am only hundredth of thousands second faster.”

VICKERS ON JEFF BURTON: "It's fantastic having Jeff (Burton) involved and what he can bring to this team. His level of experience obviously, what he's been able to accomplish in his career, the insight from all the teams that he's worked with over the years. I think just having him on board, especially for me this past off-season, just being able to have two drivers in cars testing when I wasn't able to be in a car has been huge. We couldn't ask for a better guy to be in that role, in my opinion."