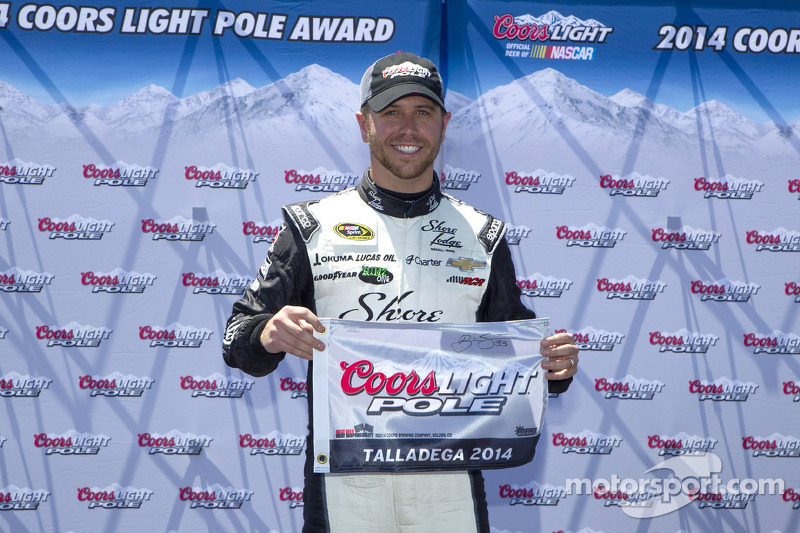 Scott in his No. 33 Shore Lodge Chevrolet used his alliance with Richard Childress Racing (RCR) and technical teammates A.J. Allmendinger, Austin Dillon, Ryan Newman and Paul Menard to knock Tony Stewart from the top-spot in his third lap around the 2.66-mile superspeedway with a fastest lap of 198.290 mph (48.293 seconds).

"It was a team effort,” said Scott, who will make his fifth career NASCAR Sprint Cup Series start Sunday.” Big thanks to Joe Falk, Circle Sport Racing; everybody at RCR / ECR Engines. It is always a team effort to get these superspeedway poles. We had a plan from the beginning to work as a team. About seven of us in a line. (Ryan) Newman was leading it; he was the point man, and I know how that feels because I was the point man in the Nationwide car yesterday. You feel like you don't really have a shot, but you do it to be a team player. It is awesome for everybody.”

Paul Menard qualified second with A.J. Allmendinger, Casey Mears and Austin Dillon rounding out the top-five. The top-six entries were all powered by Earnhardt Childress Racing (ECR) engines, with Ryan Newman making up the top half-dozen. The ECR brigade met before qualifying Saturday to discuss their strategy and execution. It worked brilliantly.

Unpredictable was the word of choice floating around the garage area leading up to Saturday’s qualifying rounds. Immediately from the drop of the green flag to begin round one, the word lived up to its hype as cars scattered, groups connected and (some) frustration ensued.

By the end of session one, Kyle Busch, despite some right-side fender damage had delivered the fastest lap ahead of Joey Logano, Jimmie Johnson, Michael McDowell and Brad Keselowski. Busch was allowed to change his right-front tire, but failed to make it through round two.

At the conclusion of round two Scott, Allmendinger, Edwards, Mears and Dillon comprised the top-five. While the green flag flew for the final five minute session, the cars stood still on pit lane, until two minutes and twenty seconds were remaining, when the 12 cars began their runs. Tony Stewart held the quickest lap coming to one minute remaining, but the six-car train of ECR thundered to the red and black flags to shuffle the overall rundown.

While Talladega’s version of knock-out qualifying favored to some, it didn’t for others. Daytona 500 winner Dale Earnhardt Jr. qualified 30th and offered a potential compromise to time trials at Talladega after a frustrating run.

"I don't think anybody had a plan there,” offered Earnhardt Jr. “You just go out there and run, and however you can finish is how you can finish really. I don't know what we could have done differently. You just go out there and run in the draft so it's hard to put up; the fastest lap. We're not too worried about it. We'll get to pick a pretty decent (pit) stall and that's about all."

Chevy NSCS at Talladega One: Qualifying notes and quotes