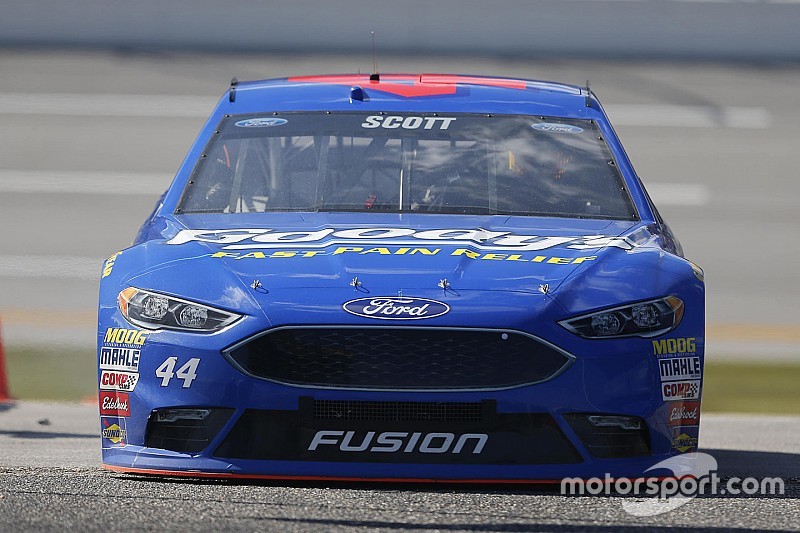 And Sunday’s Hellmann’s 500 at Talladega Superspeedway was no exception.

Brian Scott, who started from 25th, made his way into the top 10 after the first pit stop on Lap 45 and remained in the hunt for his first top-five finish in NASCAR’s Sprint Cup Series.

“It was just a solid day for the No. 44 Goody’s Ford,” said Scott, who finished second behind race winner Joey Logano. “We had a team meeting before the race. We knew that we were going to have to be perfect. We were going to have to have no mistakes on pit road, gonna have to have a fast Ford, keep good track position all day and try to make friends throughout the race so they would work with us at the end, and our game plan was really just executed really well.

“The guys did a great job on pit road. We had a really solid car. Roush Yates Engines were amazing today and we were able to show our speed to a lot of the field, and when it came down to the finish or the restart there at the end, lucky enough to have Denny Hamlin and some guys work with us to give us an opportunity at the win.”

Scott's way up the ladder

Scott, 28, earned the respect of his fellow drivers coming up through NASCAR’s feeder series. Scott had two truck wins before moving to the Xfinity Series full-time in 2010. His best finish in NASCAR’s secondary series was second four times, including at Talladega last year. He also earned the pole for the spring Cup race at Talladega in 2014 with Richard Childress Racing.

Even as a rookie, Scott should know competitors will always align with a fast car.

“I was thankful to have Denny,” Scott said. “I don’t know if playing golf with him occasionally helps or not, but, yeah, that’s always a fear of mine.

“When you have a yellow sticker on your bumper normally people avoid you like the plague.”

Along with Hamlin, Scott was instrumental in keeping Logano up front in the closing laps.

Scott’s second-place result was also the first top five this season for Richard Petty Motorsports. He replaced Sam Hornish at the end of last year and was aligned with crew chief Chris Heroy, who moved over from Ganassi Racing.

After a solid run on Sunday, Scott is hoping his team can continue building on the momentum.

“A good finish always helps,” Scott said. “It helps with the team, it helps with the guys at the shop – the morale – just trying to get any bit of a bright spot in this year has been difficult and I think that this is by far the brightest spot that we’ve had in a really challenging year for Richard Petty Motorsports.

“I guess the results and what this does for us going forward is yet to be determined, but I’m just proud. The guys have worked hard all year. They’ve deserved a lot better finishes than we’ve given them, and I’m just proud to deliver a good, solid top-5 – to do my job behind the wheel to give us a shot at the win, just have a good day for Richard Petty Motorsports.”

Joe Gibbs on final four races: "I think now it gets easier for all of us"