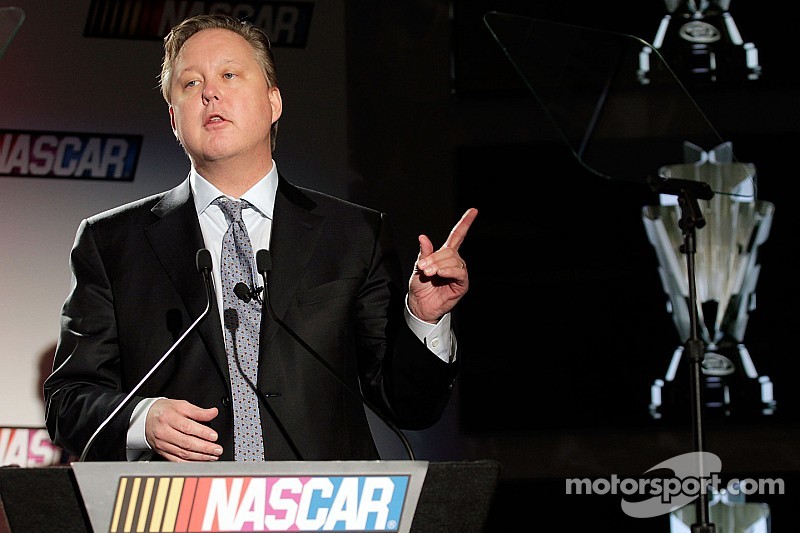 France defended NASCAR’s decision to waive the 26-race rule on Wednesday and allow Kyle Busch to be eligible for the Chase.

Although the sanctioning body granted the waiver, it doesn’t mean the Joe Gibbs racer will automatically qualify for the playoff. That’s where France says the challenge lies.

“The real beauty in the way the championship is now decided, you have a little bit of flexibility to crown your champion,” France said. “As opposed to the old days, when it was an accumulation of all the points. Now, you’re resetting it any way. You still have to get into the Chase with a win.

“Once you get there, that’s when the real work begins — those final 10 races and to survive that. I think the flexibility the format adds we’re still rewarding the best driver in a given year is helpful for us and allows us when things like Kyle Busch happens or something else that are out of a driver’s control we at least have a tool left in our tool kit so we can put them back in.”

Although France acknowledged that Busch’s absence for nearly one-third of the Sprint Cup season played into NASCAR’s decision-making process, with the new Chase format, the main emphasis is qualifying for and performing in the playoffs.

“What we determined in this case is you still have to finish strong in the remaining events leading up to the Chase, you have to win a race and you have to perform in the final 10 when it matters the most any way,” France added. “There is plenty  of merit if Kyle, in this case, is able to accomplish all that, then he will be a fine champion.”

NASCAR introduced modifications to both the aero and engine packages prior to the start of the 2015 season. While many drivers believe a car design with less downforce would enhance the current on track product, France is content with the current package.

It’s our responsibility to factor everyone’s point of view in and put forward the package that gives us the tightest, most competitive package that we can where a team that makes a big effort with a driver that’s good enough has a fair shot on any given Sunday.

“There will not be anything significant at all,” France said of changes in the near future. “Drivers have their own individual interests as they should. Some like a car loose, some like it different ways.

Three-time champion Tony Stewart, who is currently 30th in the point standings and has just one top-10 finish — sixth at Bristol where downforce doesn’t play as integral a part in the feel of the car — is one of the drivers that has struggled with the new package.

Although France says driver input “matters” when formulating the rules packages, there are other considerations involved.

“If you look at the testing that we do together, (the competitors) are very helpful,” France added. “We get good input — and then we filter it. We have to filter. We realize that a car that Tony Stewart likes isn’t necessarily going to give us the closest, tightest competition or maybe a cost factor could be prohibitive. Someone might want a certain setup.

“This is what we do. We’ve been doing this a long time and we’ve been able to balance everybody’s interest. What we do is very simple. We want a package that gives us much closer competition — more lead changes, more drivers that have an opportunity to get up and mix it up if they’re good enough and if their team is good enough and putting them in a position to achieve that and safety and cost are paramount as well.”

France said it would have been NASCAR’s preference to run the 2016 rules package in the All-Star race but it remains a work in progress.