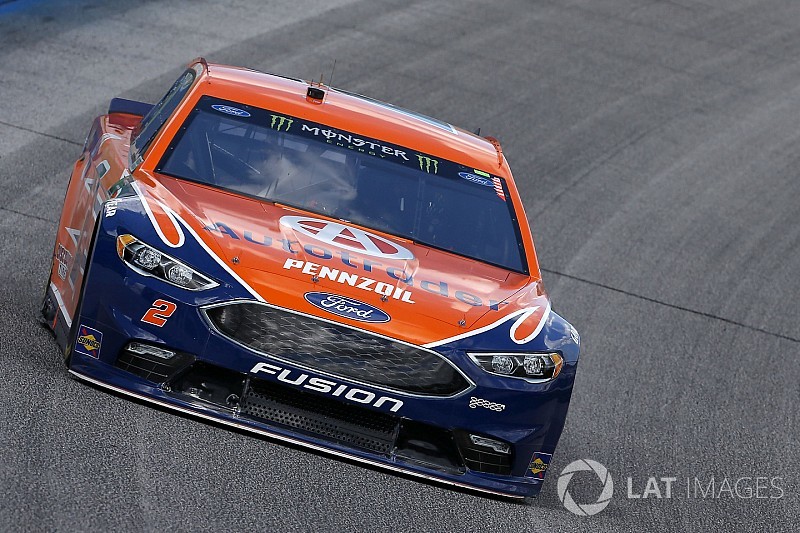 With a solid pit stop, Brad Keselowski inherited the lead and held on over the final seven laps to win Stage 2 of the Folds of Honor QuikTrip 500 at Atlanta Motor Speedway on Sunday.

“It seems like Kevin is strong here every year, but we’re fighting hard, too,” says Keselowski. “I think the big thing is keeping him honest.”

Seventeen cars remained on the lead lap after 170 circuits. Harvick’s 97 laps  were the most lap. Four cautions slowed the race, the last by five-time Atlanta winner Jimmie Johnson.

Keselowski was the first driver off of pit road on Lap 89 and led the field to green on Lap 94 followed by Bowyer, Truex, Almirola, Kyle Busch, Kurt Busch, Larson Hamlin, Menard and Logano. Harvick, who had an issue with his air hose during pit stops, pitted again on Lap 92 and restarted 19th.

After five laps, Keselowski’s lead was .205-seconds over Kurt Busch followed by Truex, Larson, Kyle Busch, Hamlin, Bowyer, Almirola, Logano and Stenhouse. Busch passed Keselowski on the outside for the lead coming out of Turn 2 on Lap 100.

Harvick moved back up to 10th by Lap 104. Stenhouse dropped to 11th followed by Suarez, Menard, Austin Dillon, Chase Elliott, Johnson, Bowman, Blaney and Jones. Harvick passed his teammate Almirola and then Logano for eight on Lap 108.

Busch extended his lead by a second and a half over Keselowski by Lap 110. Truex, Larson, Kyle Busch, Hamlin, Bowyer, Harvick and Logano rounded out the top 10. Harvick passed Bowyer for seventh on Lap 112.

Harvick passed Hamlin for sixth on Lap 115. Three laps later, the No. 4 Ford passed Larson for fourth and moved by Truex for third on Lap 120. On Lap 124, Harvick rolled by Keselowski through Turns 3 and 4 and caught Busch past the start-finish line on Lap 126.

Jimmie Johnson blew a right-front tire and spun off of Turn 2 to trigger the third caution on Lap 15. Harvick led the field down pit road followed by Keselowski, Kurt Busch, Hamlin, Larson, Truex, Kyle Busch, Bowyer, Logano and Suarez on Lap 160. The No. 78 team had issues with the airgun while changing the right rear tire and Truex restarted 15th.

Keselowski had a one-second lead over Kurt Busch coming to the line with five laps in the stage.