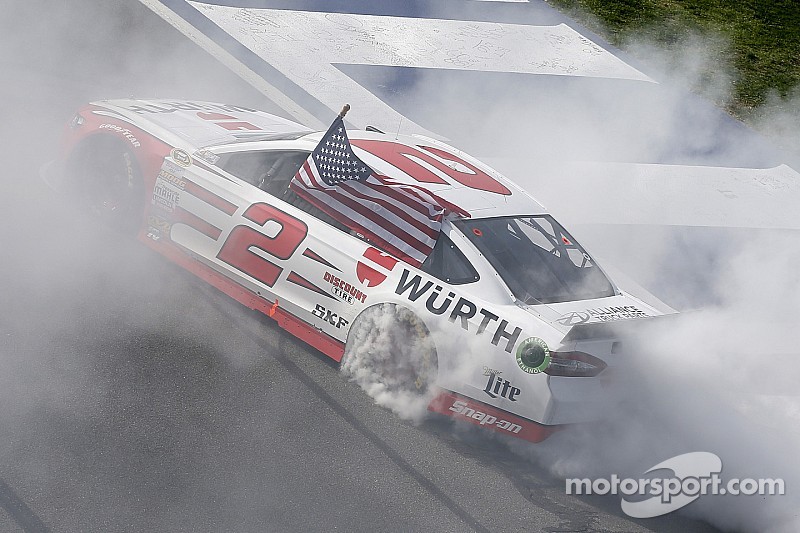 After a late caution that set up two attempts at a green-white-checkered, Brad Keselowski took his 4 tires to the front on the final lap.

Stewart-Haas Racing and Joe Gibbs Racing drivers combined to lead most of the Auto Club 400 NASCAR Sprint Cup Series race at Auto Club Speedway in Fontana, Calif., on Sunday, but Brad Keselowski led the most important lap, the last one to claim the win at what was previously considered his worst track.

With the Keselowski win, Kevin Harvick fell one-race shy of sweeping the West Coast swing with a third-straight victory, but he did get by Stewart-Haas teammate Kurt Busch just before the checkered flag to take second and extend his string of top-two finishes to eight races, going back to the final three races of last season.

"I'm not disappointed at all," Harvick said. "Just glad to be a part of a really good race."

"The Haas Automation Chevrolet was fast," Busch said. "It was a solid day. I don't know what we could've done different."

Kenseth and Hamlin's efforts went south, so to speak, with a caution on lap 185. Hamlin was penalized for an uncontrolled tire on pit road, while Kenseth broke an axle getting out of his pit stall.

Two late debris cautions led to two green-white-checker restarts. During the first of the two late cautions, Jeff Gordon, Tony Stewart and Greg Biffle stayed out for track position, but Busch and Harvick quickly got through the three cars that stayed out to take the first and second spots on the restart.

Busch and Harvick were among a group of drivers who took two tires, while Keselowski was among those who took four.

"My crew chief, Paul Wolfe, made a gutsy call to take four tires. Half of the field took two," Keselowski said.

"You could've flipped a coin for the right call there," Harvick said of the call to take two tires on the final stop.

Can Newman be the spoiler on Sunday?