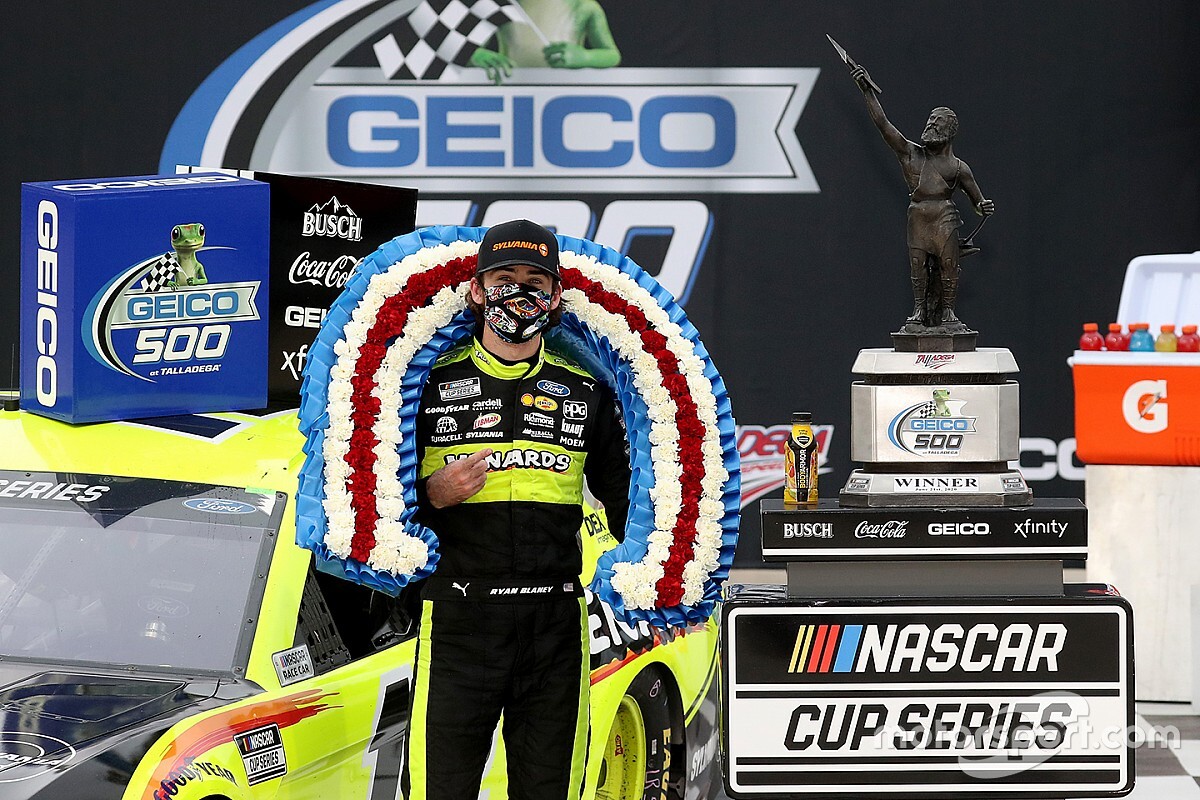 Ryan Blaney has been every bit a contender for race wins as his Penske teammates this season, but it wasn’t until Monday that was able to join them with a trip to Victory Lane.

Through the season’s first 12 races, Joey Logano and Brad Keselowski had both amassed a pair of wins as Blaney continued run on par with his teammates but repeatedly came up frustratingly short of a win.

The driver of the No. 12 Ford has been one of the most consistent performers this season, tied with the most top-five finishes (seven), ranked third in the series standings and has already led 308 laps (his career best is 660).

Yet Blaney’s first win of the season in Monday’s rain-delayed GEICO 500 at Talladega (Ala.) Superspeedway came on NASCAR’s most unpredictable of tracks, yet one on which he has proven quite adapt at conquering.

“It is a little funny. We’ve been knocking on the door all year, and it just happened to be here.”

While superspeedway racing involves many factors out of a team or driver’s control, Blaney still seems to have found a knack at mastering its intricacies.

Monday’s win was his second consecutive at Talladega and in his last three superspeedway races, he’s finished first, second and first, including his runner-up finish in this year’s Daytona 500.

The first of many?

So far in his relatively brief Cup Series career, Blaney has never won more than one race in a season. With a victory in hand fairly early this year and with the strength of Team Penske overall, Blaney hopes Monday’s win is the first of several.

“Nice to finally break through, get the first one of the year. Hopefully, this opens the floodgates here and we can get on a roll,” he said. “This team has been awesome. They’ve been so much fun to work with all year.”

The Penske organization began the year with a shakeup, swapping crew chiefs and crews among its three drivers.

Todd Gordon, who had been Logano’s crew chief since his arrival at Penske, moved to the No. 12 to work with Blaney. He and his new driver haven’t missed a beat.

“You saw him battle back, knew what he had. He knew he had speed, he overcame, came back to the front. We’ve seen that a lot this year,” Gordon said of Blaney’s performance at Talladega.

“Back at Martinsville, we drove through the field twice to finish second. He could have gotten down and he hasn’t. He’s done a phenomenal job of staying engaged and leading us, telling us what he wants, talking through things, staying focused on the big prize.

“He’s exceeded my expectations and I can’t wait to see what we can do the rest of the season.”

NASCAR: If hate crime is suspected, we’ll do the same again

NASCAR's Phelps: "The noose was real" but its origins unknown