Blaney gambles, but two-tire call "not enough" to advance 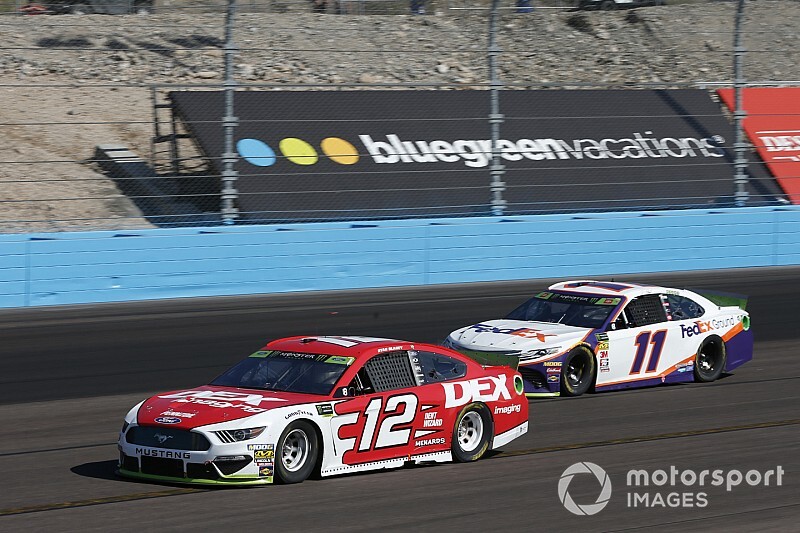 Ryan Blaney's No. 12 Team Penske team rolled the dice in the closing laps at ISM Raceway in an effort to steal the race win.

Blaney ran solidly and inside the top-five for the majority of Sunday's race, but he would still need to win in order to advance into the Championship 4.

When a caution flew with less than ten laps to go, the No. 12 team saw an opportunity and tried to seize it. With a two-tire call, he restarted on the front row and to the inside of race leader Denny Hamlin, another driver in a must-win situation.

The field fanned out through the dogleg and Blaney found himself three-wide entering Turn 1, unable to hold position as Hamlin and Busch got away. Despite finishing third, it wasn't enough to keep his title hopes alive.

"I felt like I got an okay start," he said of the final restart. "It's really hard for the guy on the bottom on the front row to accelerate and turn down the hill. It's the way it's shaped. It's kind of tough, especially on two. But I don't know, you can always get a better start, right?  I thought I got an okay start, but the 18 got a better one and got inside of me, and honestly the top is so dominant, especially if you're on two, you're kind of just sliding up from the bottom, and he was obviously the best car all day. Just needed the lead and I might have been able to pinch him through 1 and 2, and you never know.  But it's not enough."

Blaney is still in a position to earn his best points result of his career entering the finale, but looking towards next year, the 25-year-old believes he needs to focus more on accumulating points during the regular season.

"You try to build off of what you learn and everything like that. Just a matter of gaining bonus points throughout the year, he said. "I look back and that's the one thing that hurt us. We didn't win races throughout the year in the regular season. That hurts you. You don't have any cushion to lay back on. Especially when you get in these round of eights and everyone is really good and they've got a bunch of bonus points, it's hard to make it up."

Joe Gibbs Racing has three drivers in the final four with Martin Truex Jr., Kyle Busch and Hamlin. They will be joined by Stewart-Haas Racing's Kevin Harvick.

Logano eliminated: "Just wasn’t our year to make it, I guess"

Why Truex raced 'old car' at Phoenix with 'half a team'