Big wreck ends Stage 2 at Talladega with Bowyer out front 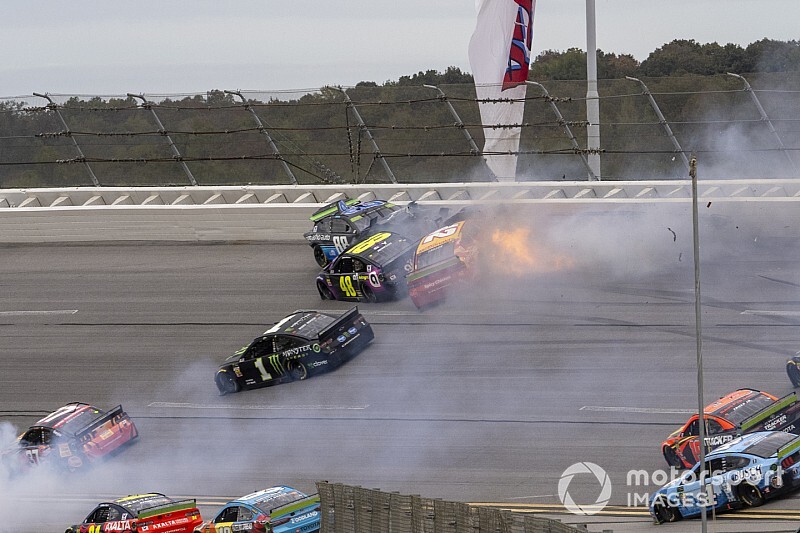 Clint Bowyer emerged as the Stage 2 winner at Talladega (Ala.) Superspeedway after a multi-car wreck in the final laps collected several contenders for the win.

The wreck started on Lap 107 when Alex Bowman tried to block a fast-approaching run from Joey Logano but got turned and ignited a multi-car accident.

Bowyer was the leader when the caution was displayed and the race did not restart before the end of the 55-lap stage.

Once the red-flag with withdrawn from Sunday’s race delay and the race was put back under yellow between Stages 1 and 2, all of the lead-lap cars elected to pit for fuel and tires.

Keselowski’s No. 2 Ford would not re-fire when the race returned to yellow. He received a push from a safety vehicle and it eventually got under power on the backstretch.

Ryan Blaney was the first driver off pit road thanks to a two tire-pit stop. When Stage 2 went green on Lap 63, Blaney was followed by William Byron and Bowman.

On Lap 68, the hood panel broke loose off Denny Hamlin’s No. 11 Toyota and appeared to give his car handling problems. “The car has no speed unless I’m right on somebody’s ass,” he said over his team radio. “Really tight and really slow.”

On Lap 73, Logano powered into the lead with a push from Ricky Stenhouse Jr.

Elliott with a line of Chevrolets behind him on the outside lane moved into the lead on Lap 78.

With a shove from Logano, Keselowski moved into the lead on Lap 84.

With 25 laps remaining in the second stage, Keselowski and Logano were attempting to fend off another run on the outside lane by Elliott.

Elliott moved back into the top spot on Lap 87 with a push from Bowman.

With 20 to go, most of the Chevrolets hit pit road for their green-flag pit stop for tires and enough fuel to make it to the finish of the stage.

Brendan Gaughan was penalized for speeding on pit road and had to make a pass-through penalty under green.

Hamlin and Martin Truex Jr. were also both penalized for speeding on pit road during their respective stops and had to make pass-through penalties under green.

Gaughan was caught speeding again while serving his penalty for the initial infraction and Stenhouse was also penalized for speeding on pit road during his top.

Once the cycle of green-flag stops was completed on Lap 96, Jimmie Johnson ended up leading the way followed by Elliott and Bowman.

On Lap 99, Elliott got a shove from Keselowski to help push him back into the lead.

With 10 laps remaining, Kyle Busch had moved up to second behind Elliott with Austin Dillon running third.

Logano powered back to the lead on the inside lane on Lap 101 with help from Bowyer.

Elliott caught Logano to retake the lead on Lap 103 but Logano remained nearby to continue to challenge.

On Lap 107, Logano, with a big run, got into the back of Bowman which triggered a multi-car wreck that collected several playoff contenders including Elliott, Truex and Kyle Larson. Bowyer emerged as the leader of the race.

Hamlin says Toyota is “open for business” in Talladega draft