Rockingham, NC--Johnny Benson scored his first career victory at the North Carolina Speedway on Sunday after running the distance on old tires and low on fuel. Benson held off a hard charge by Roush Racing's Mark Martin and drove his No. 10 Pontiac ...

Rockingham, NC--Johnny Benson scored his first career victory at the North Carolina Speedway on Sunday after running the distance on old tires and low on fuel. Benson held off a hard charge by Roush Racing's Mark Martin and drove his No. 10 Pontiac strong to the win. With the win, Benson became the fifth different first-time winner in 2002. 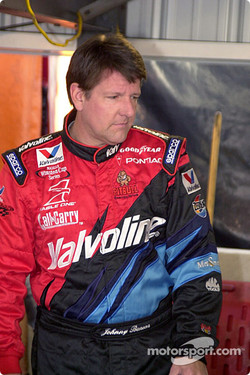 "(Crew chief) James Ince made some great calls. This crew has deserved one for a long time. We've been close and I'm glad we could get through it clean." Benson said, as he was beyond elated after hoisting his first trophy.

Following the final pit stop sequence of the day which was brought out by a yellow flag on lap 291, Ince was unsure if the fuel would be able to go the distance. As was the case with the other top contenders, Benson and his crew rolled the dice and stretched the fuel to the finish.

Following the race, after speeding across the grass in the infield, Benson wowed the crowd with some burn outs and at that time, ran out of fuel. His car had to be pushed to victory lane by a wrecker.

Benson had started the race from the 26th starting spot and worked his way through the field late in the race. "We struggled a little bit and we just kept getting tighter. It took us most of the race to get it."

With Martin finishing second, he gained numerous points in the title chase as Tony Stewart and his Joe Gibbs Racing Pontiac struggled with the setup all day long. Stewart ended the race 14th one lap down. Martin now sits second to Stewart in the standings and trails by only 75 points.

The first caution flag of the day flew on lap 21 when Bobby Hamilton's #55 spun in turn three. The 14 of Mike Wallace was collected as Hamilton's Chevy sat mid-track. The field dipped to the pits for the first round of stops and pole sitter Ryan Newman held steady until lap 41 when Martin took the lead away from Newman who had held the top spot since the green fell.

Newman later fell back in to the clutches as Martin and his Roush stable-mate Kurt Busch led the field the majority of the afternoon.

Point contender Jimmie Johnson struggled all day long with a vibration and after pitting on lap 256, a yellow flew as Todd Bodine brought out the third caution flag after a right front tire blew as his 26 sailed hard into the wall between turns one and two. At the time, Bodine had a good run going in the seventh position.

Johnson's problems continued under the yellow brought out by Bodine. He and his 48 crew went to work behind the wall to repair the right rear hub to try to remedy the vibration. He ended the event 37th, four laps down.

The Roush teams had beyond a stellar day. With Martin second and Busch third, Jeff Burton drove to a fourth place run. Hendrick Motorsports Jeff Gordon closed out the top five.