Atlanta Motor Speedway to reconfigure banking and be repaved

In the week following the July 11th NASCAR Cup Series race at Atlanta Motor Speedway, the track will be completely reconfigured for the 2022 season.

The 'Next Generation' Atlanta Motor Speedway will be narrower than before and have the banking increased from 24 to 28 degrees -- higher than any other intermediate track on the NASCAR schedule.

The track width will be deceased from 55 feet to 40 feet in the corners. The frontstretch will be 52 feet wide and the backstretch 42 feet.

The speedway first opened in 1960 and has hosted over 100 Cup Series events. Notably, the current track surface is the oldest in NASCAR and hasn't been repaved since 1997.

“As Atlanta’s racing surface has aged, we’ve challenged ourselves to reimagine what NASCAR racing at an intermediate track can be,” said Speedway Motorsports President and CEO Marcus Smith. “With high banks in the turns, narrower width and new pavement technology, Atlanta will be unlike any other mile-and-a-half track on the circuit. It’s all new for ’22 and this will be specifically designed for close, competitive racing.” 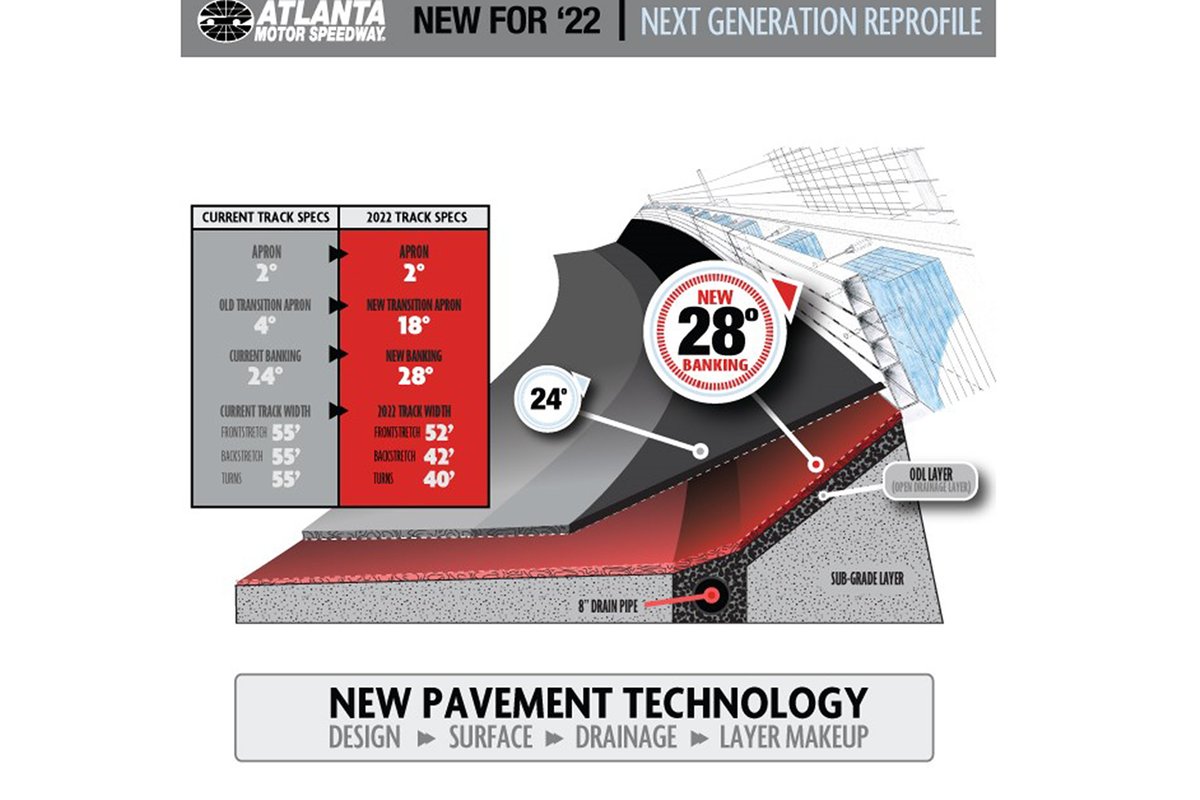 Work on the track will commence following this month's Cup Series race there, the first July event at AMS since 1974. Construction will be completed in time for the 2022 season where NASCAR will debut their 'Next Gen' race car.

NASCAR and Speedway Motorsports Inc. worked with iRacing to test concepts and develop a design that would work best in the real world.

“Our partners at Speedway Motorsports have reprofiled Atlanta Motor Speedway to optimize the racing with the Next Gen car, and early simulations suggest the racing will be closer and even more competitive,” said Steve O’Donnell, NASCAR Executive Vice President and Chief Racing Development Officer. “From the Charlotte ROVAL™ to the Bristol Dirt Race and now a re-imagined Atlanta, Marcus Smith and his team continue to take bold, innovative steps to bring unique and exciting racing experiences to our fans.”