Anticipation is Cassill's key to Charlotte 600

Communication to Keep Team a Step Ahead of the Track 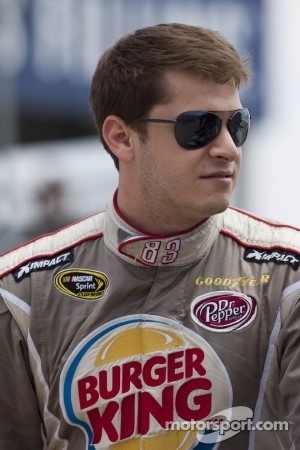 Statesville, N.C. (May 23, 2012) - After a weekend of All-Star excitement, Landon Cassill, driver of the No. 83 Burger King/Dr. Pepper Toyota, is ready to return to Charlotte Motor Speedway (CMS) for NASCAR's longest race, the Coca-Cola 600. The extra miles will definitely be a factor, but in the end, Cassill feels that adjusting to the ever-changing CMS track conditions will be the key to a good performance.

Sure, driver fatigue and parts failures are considerations for a race that's 100 miles longer than any other event, but success always starts with good communication between the driver and his crew. Cassill feels that anticipating how his car will react as the day turns into night, and relaying that information to crew chief Doug Richert will be what keeps him at the front of the pack. Cassill finished ninth in Saturday night's Sprint Showdown, which was his best NASCAR Sprint Cup finish at CMS. He hopes that the performance gives BK Racing a head start on their return to the speedway this week.

In addition to Travis Kvapil, Cassill will have David Reutimann as a teammate this weekend at CMS. Reutimann will pilot the No. 73 Toyota. It will be his third time driving for BK Racing and the second time that BK Racing entered a third car in an event.

"The Coca-Cola 600 is really tough. It's a really long race and usually hot, but we'll have to see. You've got to stay there all night. The engine's got to last. The car's got to make it 600 miles. The pit crew has to go through a lot of pit stops. It's like any other race, though, where you've got to put together the whole package to have a good finish.

"As a driver, you have to remember that you're making 400 laps and it's going to take a while to finish. The key is to anticipate the changes the track is going to make and understand how your car will respond. You've basically got to stay a step ahead of the track. The track gets faster when it gets cooler. That makes your car start handling differently. Sometimes it gets tight or loose, so you have to keep up with it on your adjustments. Hopefully we did what we needed to do in practice.

"The All-Star race was helpful getting us prepared for this weekend. I think it gives us a good place to start. We have qualifying on Thursday, so hopefully we'll start off the weekend with a good starting spot.

"David Reutimann is a good driver. He'll have a lot to offer us. The guys worked really hard to get that car prepared and hopefully that will help us out."