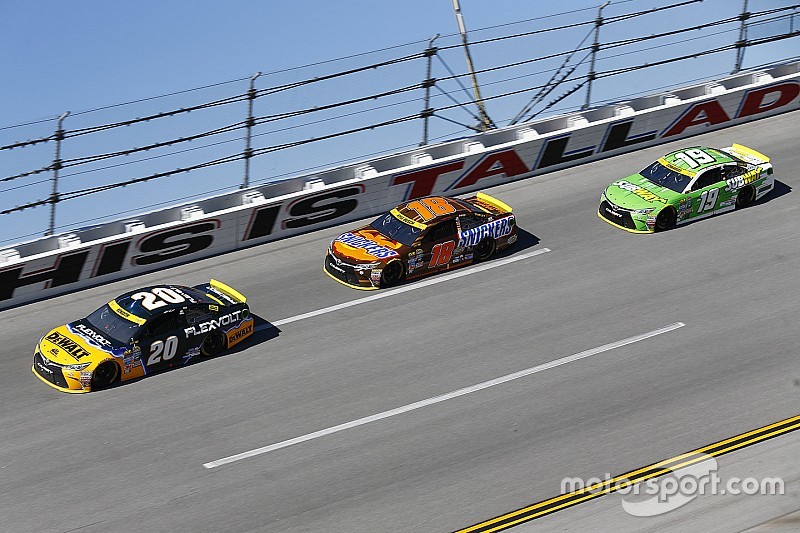 Joe Gibbs Racing’s plan to have its top three drivers in the Chase standings ride around in the back of the pack most of the race at Talladega was probably a smart one, but it certainly wasn’t aesthetically pleasing.

Nor did it win over many NASCAR fans, who were not already fans of the JGR organization. There was even a smattering of complaints on social media from fans of some of the drivers involved over their decision not to compete for the win.

Before the race, the teams of Matt Kenseth, Kyle Busch and Carl Edwards decided their best strategy to advance to the Round of 8 in the championship Chase was to run in the back and avoid the big accidents that typically plague races at Talladega.

As it turned out, there never was a “Big One” – a wreck that collects much of the field – and all three of the drivers moved on to the next round.

JGR driver Denny Hamlin, whose points position was much more precarious at the start of the day, pretty much had to fend for himself running up front and joined his teammates thanks to his third-place finish and a tiebreaker over Austin Dillon.

“We don’t like to race like that, but it’s like Matt said, ‘It’s the hand your dealt.’ You don’t want to give it up and we played it right,” Edwards said after the race. “We went back forth on what we should do.

“This is what we have. Don’t mistake with what we did today with being easy or simple. That’s hard to do. Actually at the end we were at very high risk. It’s tough.”

Edwards said there is a natural inclination with drivers to compete for every position on the track and it took enormous discipline to avoid abandoning the plan when an opportunity to advance presented itself.

“The downside of playing it safer, like we did, is that you can get wrecked like that, too. Then, you just played it safe and got wrecked – that’s terrible two ways. That’s not what we want,” he said.

“You really have to be smart and you have do it the whole time. It’s really hard. And there is still nothing guaranteed.”

Despite the complaints after the race, there have been numerous incidents of drivers getting caught up in wrecks that were trying to “ride out” the race in the back of the field. It’s not an uncommon practice in superspeedway racing – Chase berths on the line or not.

Because the plan actually worked to perfection in this instance, it’s getting a fair share of criticism. Had the JGR drivers involved competed for the win all day but wrecked out while attempting to win the race, some of the same fans criticizing now would have criticized them for attempting moves that were “not necessary.”

The bottom line of the current Chase format is based on surviving and advancing. There is no championship to be won unless you earn the right to compete for it in the season finale at Homestead-Miami Speedway.

There is nothing wrong with getting there in any legal method allowed under the rules.

“It’s frustrating, but to have a dull day today it’s certainly going to make for a heck of a lot more exciting days down the road,” Busch said.

The reward is being able to race on and go into the next round and have a chance to race for another championship.”

It may not have won any public relations battle, but JGR’s plan paid off to perfection on Sunday.

Hamlin advances into the Round of 8 via tiebreaker