CONCORD, N.C. - With a test session in August under their belt, Marcos Ambrose and the No. 9 DEWALT Ford Fusion team have the tools to play the spoiler role in Sunday's 400-mile event that opens the Chase for the Sprint Cup. 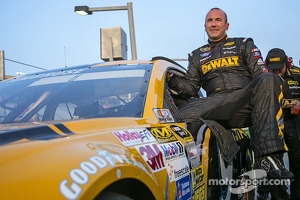 Although the team is not eligible to win the Sprint Cup title, they have built momentum over the last two months, including two top-10 finishes in their last four races.

Ambrose has six NASCAR starts at the 1.5-mile speedway. In his four Sprint Cup starts, he posted a best finish of 11th in the 2009 race.

Crew Chief Drew Blickensderfer has seven NASCAR starts as a crew chief at the Chicago track. His best finish at the track came in the 2007 Nationwide race when driver Matt Kenseth drove to a runner-up finish.


"We have been running a lot better these past few months, and our test went really well at Chicagoland. I think that gives us a great chance to really be up front all weekend. We had a good result at Michigan just a few races ago and again at Atlanta, and Chicagoland is a high-speed, momentum track similar to those. Everyone feels confident about this weekend.

"Our mile-and-a-half program has improved greatly from the beginning of the season to today. Like I said, the past month Drew and the guys have just found a lot of speed in the cars, and we have had good strategy during the races. That has led to better results, and now, we feel like we can compete each time for a top-10, top-five or a win. It would be very cool to come into this race and spoil the party for the guys in the Chase."


"Our test at Chicago was really fruitful. We learned a lot, and I think we will have a good package for this weekend. Our cars are a lot better on the mile-and-a-half tracks. We have learned a lot with the new car, and we're all starting to see the results. Michigan and Atlanta were good races for us, and this weekend should be too."

Ty Dillon: Petty GMS Racing "to get the best of me"