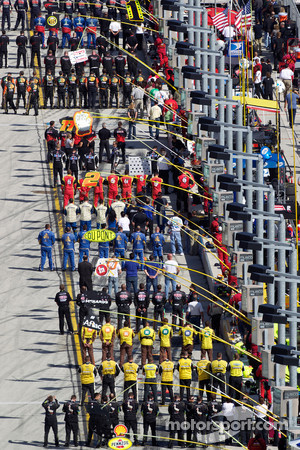 “Aloe Blacc is recognized around the globe for his smooth vocals, so it’s only fitting he perform at the ‘World Center of Racing’ in front of more than one hundred thousand race fans and millions more watching on FOX,” Daytona International Speedway President Joie Chitwood III said. “We look forward to hearing his moving rendition prior to the start of NASCAR’s richest and most prestigious race.”

Aloe Blacc will release his major-label debut album Lift Your Spirit March 11th on XIX Recordings/Interscope Records. The set follows up Blacc’s collaboration as vocalist and co-writer on well-known DJ/producer Avicii’s track “Wake Me Up,” a song that hit the Top 5 on the Billboard Hot 100 and #1 on its Hot Dance Club Songs and Dance/Electronic Songs charts, as well as topping charts in more than 100 countries.

Blacc’s five-track Wake Me Up EP came out last September and included an acoustic version of the title track. Blacc’s current single, “The Man,” which is featured in the new Beats by Dre national TV campaign, is quickly climbing to the top of the charts with more than 900,000 singles sold. Blacc is featured in the line-up for this April’s Coachella festival and will be touring the U.S. this summer with Bruno Mars.