Almirola prepared for the long run at Charlotte

Almirola to Go 600 Miles with U.S. Air Force
Showdown Has No. 43 Team Prepared for the Long Run 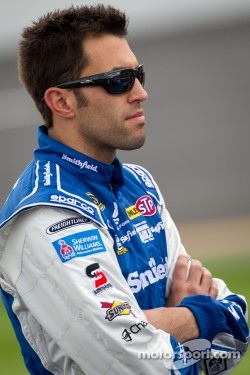 CONCORD, N.C. (May 22, 2012) - Aric Almirola and the No. 43 Richard Petty Motorsports team will carry the colors of the U.S. Air Force this weekend as the NASCAR Sprint Cup Series marks the Memorial Day holiday and pays tribute to the nation's fallen military. Sunday's Coca-Cola 600 at Charlotte (N.C.) Motor Speedway is the first of two primary sponsorship races for the Air Force, which is also an associate sponsor on the No. 43 car for the entire 2012 season.

The 600-mile race will be Almirola's first points-paying race in a Sprint Cup car at the 1.5-mile oval. But he's fresh off a seventh-place performance in the Sprint Showdown exhibition race at the track last Saturday, a 40-lap primer that gave Almirola and crew chief Mike Ford plenty of data to prepare for NASCAR's longest race of the year. Almirola also has a top-five and three top-10s in seven Nationwide Series starts and two top-10s in two Camping World Truck Series appearances at Charlotte.

In addition to his on-track activities this weekend, Almirola will also participate in Richard Petty Motorsports' third annual Fan Appreciation Day on Thursday from 7 a.m. to noon at the RPM shop in Concord, N.C. The first 200 fans in line who donate a nonperishable food item to the Second Harvest Food Bank of Metrolina will receive a commemorative ticket allowing them access to the shop and an autograph session with Richard Petty, Almirola and his teammates, Marcos Ambrose and Michael Annett. Other activities include a Q-and-A session with the RPM drivers and Richard Petty hosted by Miss Sprint Cup, raffles, give-a-ways and free food.

"The Showdown was fun and we learned a lot that we can take into the 600 weekend. We were up there battling, but we were just a little too tight. Now when we unload this weekend, we'll be that much more ahead because we've got all those laps under our belt already. Sunday's race will obviously be a lot longer and the track conditions will change more over the course of the evening, but I think we can bring a pretty competitive U.S. Air Force Ford Fusion.

"I'm very proud to have the Air Force on our car this weekend. It's Memorial Day weekend, a time that we remember all the servicemen and women who have given their lives for our country. And the Air Force sponsorship also helps us to salute all the brave men and women who are currently out there fighting for us today.

"My connection to the Air Force goes back longer than probably a lot of people know. My father was an Airman and I was actually born on Eglin Air Force Base in Florida. So this is a very special partnership to me. Earlier this year I got to go out to Nellis Air Force Base (Nev.) and spend some time with the Airmen on base there and meet some of the Thunderbirds, too. I have such respect and appreciation for the work they do for our country. I'll be really proud to strap into the U.S. Air Force Ford Fusion on Sunday and race for them."

"The 600 is so challenging because of the sheer length of it and also because the conditions change. It starts when the sun is still out and then transitions into a night race. So you're dealing with temperature changes and changes in grip, and you're constantly adapting and working on your car to keep it competitive for all 600 miles.

"Of course, the most important thing is to be there in the end. You don't want to suit up for 600 miles and get knocked out early, so you have to race smart and take care of your equipment. You also need an engine that will go the distance and we feel confident going to the track with Roush-Yates horsepower under the hood."

The team has prepared chassis No. 783 for the Charlotte race. This car ran earlier this season at Texas and Las Vegas.

Kurt Busch ready for the marathon at Charlotte