Almirola "oh so close" to advancing to Homestead 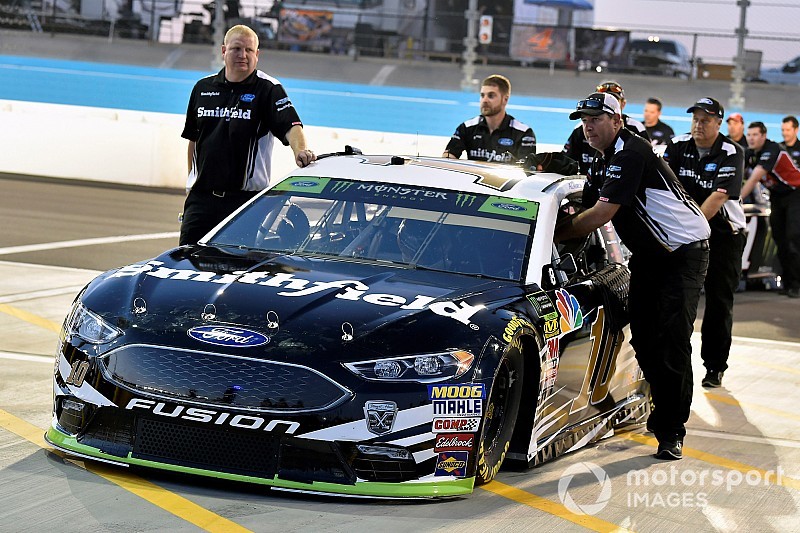 While facing a must-win situation, Aric Almirola fought his way to the front of the field at Phoenix, but still came up short in the end and missed out on the Championship 4.

After Kurt Busch and Chase Elliott crashed out of the race, the door was opened for Almirola to make his presence known. He drove up inside the top-five, but needed to win in order to escape elimination and have the opportunity to go for the 2018 Monster Energy NASCAR Cup title at Homestead.

The caveat? The driver who's place he would be taking in the final four would be his teammate, Kevin Harvick.

Almirola had two legitimate chances at the end of the race with late-race restarts, but he could not snatch the lead away from Kyle Busch.

He instead finished fourth, joining Elliott, Busch and Clint Bowyer as those eliminated after Sunday's race. But still, Almirola could hold his head high knowing the position his team ended up in with a car he said shouldn't have been able to battle for the win in the penultimate race of the season.

"I’m just really thankful for this group and these guys on the Smithfield team are awesome. This is our first year working together. You look at all the teams we’re racing and they’ve got four, five, six, seven years working together, so what we’ve accomplished in one year is a hell of a lot, but right now all I can think about is being inside of Kyle down there in the new one and two and just not being able to get the power down to get up beside him.  It’s bittersweet.  It was a good day for us, but today we needed to win and we didn’t win.”

In his first year with SHR, Almirola has had multiple chances to reach Victory Lane and anded a four-year winless streak earlier in the playoffs at Talladega.

"I am surprised by this group," he said, reflecting on his season. "I mean, what surprises me the most is this group of people that work on this race car. All these guys on this team, they are amazing and what we’ve accomplished in one year together is pretty outstanding. I don’t want the season to end. It’s been a long grind and I’m tired and I’m ready for the offseason, but I really wanted to go to Homestead with a chance to run for a championship and oh so close.”