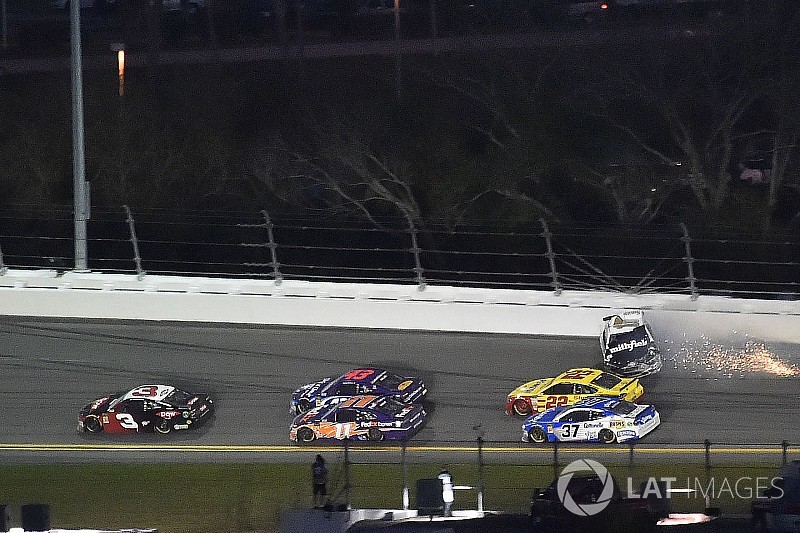 Aric Almirola led the white flag lap in the Daytona 500 on Sunday, but he never saw the finish of the race.

Coming through Turn 3, race winner Austin Dillon got a run—and ran into the back of the No. 10 Stewart-Haas Racing Ford.

Almirola went from first to 11th as Dillon sailed off to the win in the No. 3 Chevrolet at Daytona International Speedway.

“It was the last lap and we’re all trying to win the Daytona 500,” Almirola said. “It’s the biggest race of the year and it’s a career-changing race, so we were just racing really aggressively. I put every move I knew to try and stay in the lead and, unfortunately, I just wasn’t able to hold on.  He got to my back bumper and was pushing and just hooked me.

"My heart is broken, but the beauty is we’ll go to Atlanta and we’ve got an incredible race team here at Stewart-Haas Racing and we’ll have another shot next week.”

Almirola's charge to the front

Almirola, who was making his debut in the SHR No. 10 Ford, started from the rear of the field after going to a backup car. By Stage 2, he finished fourth and restarted seventh for the second half of the race. When Blaney led the conga line, logging laps through the final stage, Almirola remained in the top 10 waiting for a break.

Debris from William Byron accident on Lap 93, stopped the action and set up the next wreck. Almirola was running third and pushed his teammate Kurt Busch to the lead. Busch lost control of his car after Ryan Blaney took the air off of the back and sent the No. 41 car spinning into the field. Although Almirola received damage, he was able to continue for overtime.

Almirola started second to Denny Hamlin for the final restart. With a push from Dillon he moved past Hamlin for the lead. Dillon challenged Almirola and he tried to block the No. 3 Chevy.

Almirola's sole win in the Monster Energy Cup Series came at Daytona in July 2014. Knowing what it takes to win a restrictor plate race, Almirola, he didn’t believe Dillon's move was over the top.

“He’s not driving too aggressively, he’s trying to win the Daytona 500 just like I was,” Almirola said. “I saw him come with the momentum and I pulled up to block and did exactly what I needed to do to try to win the Daytona 500. I wasn’t gonna just let him have it. I wasn’t gonna just stay on the bottom and let him rail the outside, so I blocked and he got to my bumper and pushed and I thought I was still gonna be OK and somehow I got hooked. I still haven’t seen the replay, so I don’t know what happened, but I’m just devastated."

Still, Almirola can put the incident in his rearview mirror. He's optimistic about what his future holds since aligning with Stewart-Haas Racing.

I really thought we were gonna start this relationship off with Stewart Haas Racing in Victory Lane and get Smithfield and Ford and everybody to Victory Lane, but I’m really proud of everybody," Almirola said. "That was a backup car and we were a half a lap away from winning the Daytona 500. I’m really proud of that. I’m still very excited. I’m not gonna let that get me down. We’ve got an incredible race team and I’m gonna go to Atlanta and we’re gonna have good race cars there and we’ll have a shot to win next week.

"That’s something I’ve not had in my career, where I feel like every week I get on the plane to go to the race track I feel like we’re gonna have a shot to go win. This is just one race. It might be the biggest race and this one is gonna hurt for a while, but I think next week we’ll have another shot.”