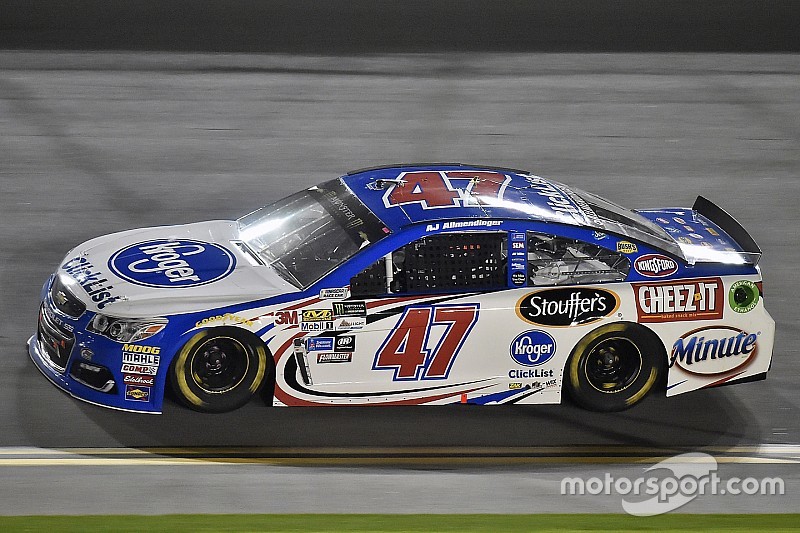 AJ Allmendinger equaled his career-best result in the Daytona 500 on Sunday, finishing third as several cars ran out of fuel around him.

Allmendinger was one of the few cars to make it to the finish line unscathed, avoiding the carnage that caused 15 cars to fall out of the race. But that doesn't mean the No. 47 didn't have their own issues to deal with.

“We had something go wrong in the left front in the middle of the race,” Allmendinger explained in the post-race press conference. “We had to pit like nine times to figure out what it was. My crew did a great job to figure it out and diagnose the problem and fix it. All in all, I’m just proud of the effort … and more than anything else just to have a good start to this 2017 season. The effort is there. Our equipment is there. We’ve just got to put it together. Hopefully this is a great start.”

Allmendinger's strategy for the race was simply survive until it was time to go, which worked to perfection. "I think really the last couple years here, for me I've noticed because I've always tried to hang in the back, pick a time to make a run. Everybody just gets three‑wide now. It's hard to make any moves happen.

"I think that anticipation level, instead of waiting 20 or 30 to go, you have to go with a hundred to go.  You have to get your track position. If you lose it, it's hard to get it back. To me that's the bigger deal. Over the last couple years it's kind of hard to make moves through the middle of the pack through the field with 20 to go. Everybody was trying to get up there and make sure they got the track position. That's what happens here."

The 35-year-old crossed the finish line 0.419 seconds behind race winner Kurt Busch in the third-position, equalling his best result in the 500, which came back in 2009.

“I was kind of looking at the fuel pressure gauge, the window, the mirror; and the last 10 laps, knowing that we were pretty close, I was just trying to run in that pack and run quarter throttle and trying to hold my spot the best I could," he said of the run to the checkered flag. "I knew everybody was close and it might come down to who did run out of fuel."