Bowman ready for "reset" in 2019, including new paint scheme 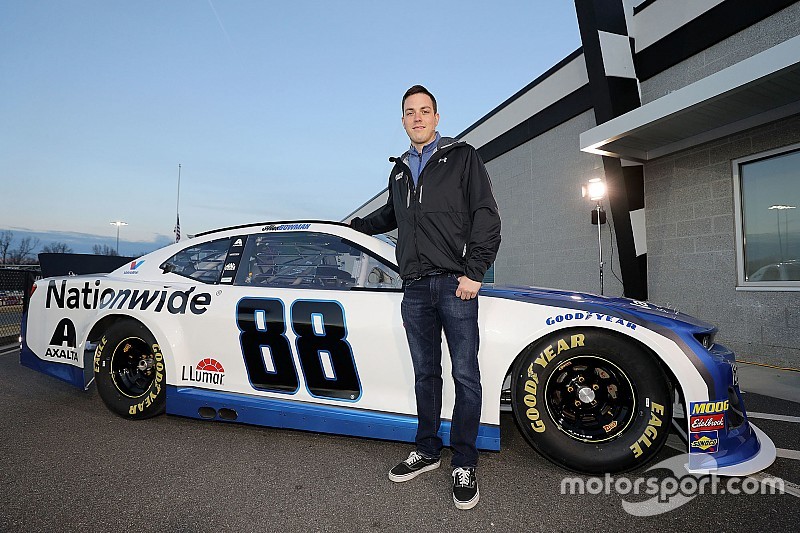 Alex Bowman wanted more out of his fulltime debut in the NASCAR Cup Series with Hendrick Motorsports but is ready for a “reset” heading into 2019.

While there will be some changes with Cup teams at Hendrick Motorsports next year, Bowman and crew chief Greg Ives and the majority of his No. 88 team will remain intact.

One thing changing is the paint scheme of his primary sponsor Nationwide on his Chevrolet Camaro, which Bowman unveiled during a fan event Thursday night at the GoPro Motorplex in Mooresville, N.C.

The design features a primarily white paint scheme on the sides with the more traditional Nationwide blue on the hood and roof. The No. 88 on each side are black with a light blue border.

“I really like white race cars and I wanted to do something a little different with the number outline and went with blue there,” Bowman, 25, said. “I think it looks really good.”

There were a lot of eyes focused on Bowman’s first full season with HMS, in large part because he was taking over the ride from Dale Earnhardt Jr., who retired from fulltime competition at the end of the 2017 season.

Earnhardt, who has since joined the NBC Sports NASCAR broadcast team, remains connected to the team through his continued relationship with sponsor Nationwide Insurance.

“He was still standing by (the car),” Bowman joked about Earnhardt’s presence at Thursday’s event. “I feel like everybody’s been really supportive and Nationwide’s really embraced me as well as (sponsors) Axalta, Llumar and Valvoline and everybody at HMS have been super-supportive. That hasn’t been too bad.

“Definitely there are a lot of Dale Jr. fans out there and it’s cool to kind of take over the No. 88 car, but it’s also really cool to have Dale’s support and all his help.”

While Bowman had a solid first year at HMS, he remains disappointed he wasn’t able to make a visit to Victory Lane. Bowman finished the year with three top-five and 11 top-10 finishes and won the pole for the season-opening Daytona 500. He finished 16th in the series standings, advancing to the playoffs.

“We didn’t win and that’s pretty frustrating for me. We made it further than a lot of people thought we would in the playoffs and that was pretty cool. I really just wanted more,” he said.

“It was a rough year for all of us at HMS. To start where we did and make the progress that we did was pretty cool. We still need to go win races. Greg and I do a good job together. We communicate really well, we get along really well. I really enjoy worked with him.”

Bowman said with the introduction of new rules package for next season, it remains unclear whether the advances HMS made in 2018 will carry over into 2019 with the same or better results.

“I felt like we made some good progress around the ¾-mark of the season and then we didn’t end the season the way we wanted to or how we wanted to. I think going forward it’s good to have a reset,” he said.

“The rules package is going to change so much. The things we were doing, it’s hard to know if we can keep that rolling going into next year. I’m curious, as I think everyone is, how the racing will be next year and how we approach it.”

Earnhardt gave Bowman rave reviews for how he handled his first full season at HMS, particularly in the light of the performance struggles the organization had to overcome early in the year.

“A young driver, their first year (with a new team), not performing the way they want to perform, he never put it anybody else, he never pointed fingers, he never said anything that an attitude to do it,” Earnhardt said.

“I thought his attitude was great. It was frustrating for him all season not to run better, but as I was watching, Chase (Elliott) had his moments and won some races, but there were a lot of times when Alex was right there or one of the better HMS cars.

“I’ve been in the situation where it’s frustrating if you have three teammates they’re all kicking your butt. And I’ve been on the other side of it when we’ve been the better car over a period of time. I feel like that Alex proved this season that if they can get the cars where they need to be, they have the right guy in the seat.”