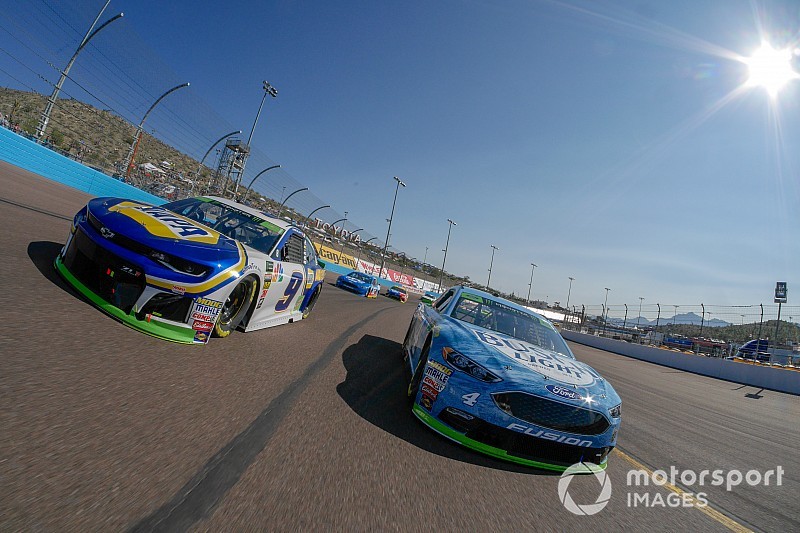 In the end, Kevin Harvick still advanced to the Championship 4 but the journey there was anything but smooth.

Harvick appeared well on his way to redeeming himself from a NASCAR penalty earlier in the week as he arrived at Phoenix with a very fast No. 4 Stewart-Haas Racing.

He was fast in practice, won the pole and led the first 73 laps of Sunday’s Can-Am 500.

But just as he was getting passed by Chase Elliott for the lead, Harvick felt his right-rear tire going down. He dove down pit road, even though it was closed for the end of the stage, to ensure no extra damage occurred to his car.

Harvick spent the remainder of the race battling back from that hole but by the end of the race, he was back in contention for a strong finish and a spot in the Championship 4.

“I felt (the tire) start to go down going into Turn 1 there and just slowed down to the point where I thought I could at least make it back to the pits and not hit the wall,” Harvick said. “It came at an OK time because it didn’t tear the car up.

“You know, in that instance you just hope that the sway bar stays connected, and that’s really the biggest worry. I hadn’t looked under the car and seen how bad it drug it all off, but it was good enough to keep going, and the sway bar was still hooked up, so that was the main thing.”

As long as Harvick’s SHR teammate, Aric Almirola, didn’t win the race, Harvick would advance to the final four by points.

As it turned out, Almirola was fast and in contention for the win, sending the outcome in doubt down to the finish. Almirola, on fresher tires, eventually got passed by both Brad Keselowski and Kyle Larson and dropped to fourth.

Harvick ended up fifth to cement his championship opportunity.

“It never really drove as well after that, but we kept ourselves in position all day,” he said. “There at the end, it was just like with everybody wrecking and all over the place, we just needed to stay out of trouble and try to find a safe spot there.”

Harvick will attempt to win his second championship next weekend with a different crew chief at the helm. His regular crew chief, Rodney Childers, was suspended the final two races as part of the penalty the No. 4 team received earlier this week.

Asked to assess his chances at Homestead, Harvick said, “I think we have a chance every time we show up. Our guys are doing a great job obviously to accomplish everything we did this weekend was quite the feat without your crew chief and car chief.

“But Tony Gibson and (interim car chief) Nick (DeFazio) did a great job filling in and everybody kept their head about them and we were competitive all weekend.”

Almirola "oh so close" to advancing to Homestead

Kurt Busch: “I just didn’t get the job done" at Phoenix