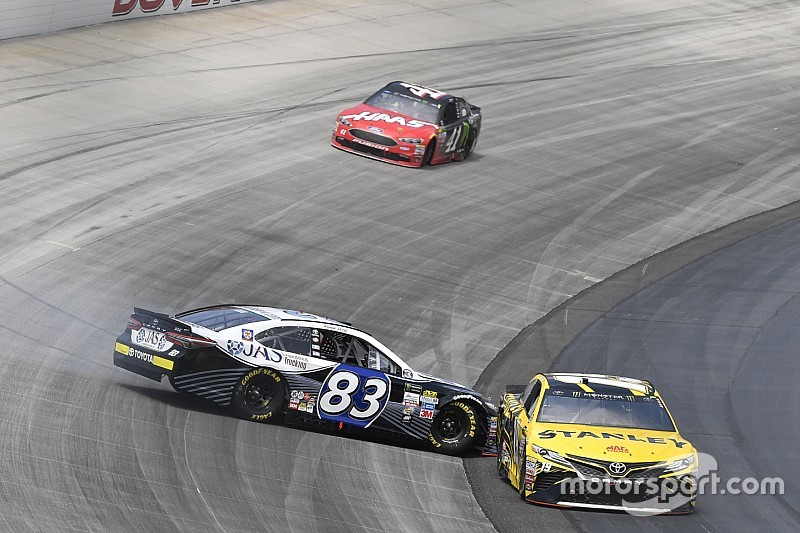 Suarez not only started the weekend with his top qualifying effort since graduating to Cup -- third -- but he also led his Joe Gibbs Racing teammates to the finish line with a career-best sixth-place run.

Thrust into the No. 19 Stanley car at the start of the season when Carl Edwards unexpectedly bowed out of Cup racing, the 25-year-old Monterrey, Mexico native appears to be acclimating nicely to his new ride.

“I think it was good,” Suarez said. “Like everything, ups and downs. In the beginning, we were okay and then later on we were pretty bad. We were able to make some adjustments and get back to a top-10. I feel like we had a top-10 car and we ended up right there.”

After four full seasons in the NASCAR Mexico Series, Suarez was fast-tracked to the Xfinity tour while running K&N Pro Series East and the Camping World Truck Series along the way. Suarez won 14 times climbing up the developmental series before settling into a full-time Xfinity ride in 2015. He finished fifth as a rookie and returned the following season to score three wins, three poles, 19 top fives and 27 top 10s in 33 starts — along with the Xfinity Series title.

Not a problem-free day for Suarez's teammates

The Monster Mile threw a lot of demands at competitors on Sunday. Suarez’s veteran teammates all had issues. Kyle Busch started from the pole but mishaps with an air gun in the pits led to a loose wheel on Lap 19 and additional issues throughout the race. Although he recovered and was running ninth at the end of the first stage, Busch was forced to pit with a loose wheel 45 laps from the finish. He ran 16th, a lap down.

Denny Hamlin was the next Gibbs driver to experience the perils of pitting when the No. 11 team suffered a tire violation on Lap 49. The crew told the driver they had air gun issues on the left front. He cleared the melee on the final laps to finish eighth behind Suarez.

Matt Kenseth collected the JGR penalty trifecta plus bonus points for speeding entering the pits after scoring a commitment line violation. Kenseth, who finished in the top five in the first two stages, settled for 13th-place.

After earning his first stage point for finishing eighth in the third segment at Charlotte, Suarez finished 10th in Stage 1 at Dover. The No. 19 team elected not to pit after the first stage and Suarez moved up to seventh. Suarez was 10th on the Lap 199 restart, but dropped to 14th by the ninth caution 20 laps later. He started the third stage in 13th. Through attrition, he moved up into the top 10 with 100 laps left in the race.

Tires also came into play as teams were limited to eight sets during the race — with NASCAR dropping the allotment from 2016 by one set. Suarez was 12th with five laps remaining in the race. When the race went into overtime, crew chief Scott Graves elected to pit for tires and Suarez lined up ninth. That’s when all hell broke loose.

“A lot of people with no tires, some more with two, some more with four,” Suarez said. “It was a little crazy. I was surprised how good of a grip I had getting to corner one and then exit of two I saw the 13 (Ty Dillon) sideways and really a big mess up there and I’m lucky I was clear by myself to move around and avoid the wreck, but it was a close one for sure.”

When the smoke cleared, Suarez had raced through the accident for his fourth top-10 finish of 2017.

“I think the entire team is making progress, and that’s for sure,” Suarez said. “I’m very proud of that and we just have to keep working and keep moving in the same direction.”

Danica Patrick: "We got a bit lucky" with first top-ten since 2015