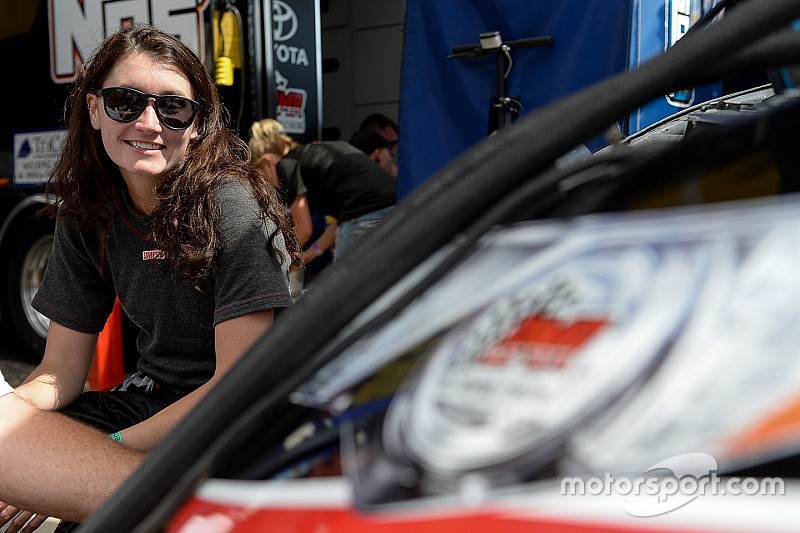 Julia Landauer is only making four scheduled starts this year in the NASCAR Pinty’s Series but she’s already turning heads in Canada.

The former NASCAR Next driver made history during the APC 200 Sunday at Jukasa Motor Speedway by becoming the first female to lead a competition lap in the history of the NASCAR-sanctioned series.

Landauer later made contact with the wall in traffic and finished 15th.

“That was a heartbreaker,” Landauer tweeted after the race. “(DJK Racing) gave me a rocket ship, ran top-three for a long time, then got pinched on the exit of four into the wall. My day ended when I got slammed hard into the wall on a late restart by a lapped car. Unnecessary end to a great weekend. Huge thanks to the team.”

Lacroix off to red-hot start

Although he wasn’t able to open the season with two straight wins, Kevin Lacroix should feel really happy after the APC 200 at Jukasa Motor Speedway.

After qualifying outside the top-10 to start the race, Lacroix was able to move up throughout the race and contend for the win on the final restart of the race starting third behind eventual winner Andrew Ranger.

"The race went really well, explains Lacroix. “As per usual, we were not very fast in the opening stage. But after 10 laps or so, the other drivers began to slow down, but we kept the same pace. We were then able to make our way up the field. "

"I was behind Andrew Ranger for the restart, and I immediately went for the second position,” said Lacroix. “Andrew and I created a gap with the rest of the field, and we had an intense battle, making a lap and a half two cars wide. I dove on the inside of the last corner, but the car was slightly understeering, so I did not have a good exit and Andrew took the checkered flag before me."

Lacroix trails Ranger by just one point in the championship standings (91-90) after two races of the 2019 season.

Tagliani moves up in standings

Despite having an ill-handling race car at Jukasa, Alex Tagliani was able to overcome issues with his car to finish fifth in the race and as a result, moved up from 10th to fourth in the points standings after two races.

“This top-five finish is a positive result after such an eventful race,” commented Tagliani following the APC 200. “Unfortunately, we did not have the proper setting on the car for this track.

“Even under these conditions, we managed a top five finish, which leads us to believe that if we overcome these minor problems, we should be able to fight for many wins in the races ahead on the schedule.”

Despite having one of the fastest cars in practice and qualifying second, DJ Kennington was not able to score back-to-back Pinty’s Series wins at Jukasa Motor Speedway.

Kennington suffered a punctured tire which eventually forced him to pit while running second in the race ending his chances to battle Andrew Ranger for the win.

“Should have been a podium finish for us today but some bad luck with the cut tire” said Kennington.  “But we survived to grab a top-10 and we know this team is going to be contending for wins going moving forward this season. What a shame (to cut a tire while running second).”

Kennington was able to rebound and finish eighth to tally back-to-back top-10 finishes to open a season for the seventh time in his career.

L.P. Dumoulin is showing everyone he could be the first driver to win back-to-back Pinty’s Series championships.

The 2018 champion finished fourth - after qualifying 12th in the race - to make it two top-four finishes to start the season.

“It's really a great race for my No. 47 WeatherTech Canada/Groupe Bellemare,” said Dumoulin. “Race strategy, suspension adjustments and pit stops were all well executed. The car was performing well on the longer runs and it paid off in the end.”

Dumoulin moved up to eighth-place by Lap 25 and remained in the top-10 throughout the remainder of the 200 lap event.

The Pinty’s Series only competitor to commute from British Columbia has sure made the long trip worthwhile over the first two starts of the season.

White, from Sun Valley, British Columbia, powered his No. 21 CBRT entry to another top-10 finish in the APC 200.

After having to return to the race shop after practice on Friday for repairs to the rear end of his car, and clutch problems during practice on Saturday, White still felt his car was going to be okay for the race.

White rebounded from a spin after contact in the race and pitted late for tires that enabled him to finish in the top-10 in consecutive races for the first time since 2012.

After finishing runner-up in both Pinty’s Series races at Jukasa last season Donald Theetge was one of the favorites to win entering the weekend.

While he was fast in practice and qualified well, his car developed a misfire and faded back late in the race after leading 25 laps.

“I was really happy with our test here at Jukasa and the car was very good right off the trailer,” said Theetge.  “Just some minor changes nothing too much needed to be done.”

Theetge qualified fourth and remained in the top five throughout the first half of the race moving into the lead on Lap 73.

He stayed at the point until pitting for tires under caution on Lap 97. Theetge worked his way up to third by Lap 150 but started having mechanical issues that forced him to fade back and finish 10th.

“I had an amazing car and team,” said a very disappointed Theetge.  “I love this track and run really great here and thought today was going to be our day as we ran with the leaders until we had issues.”