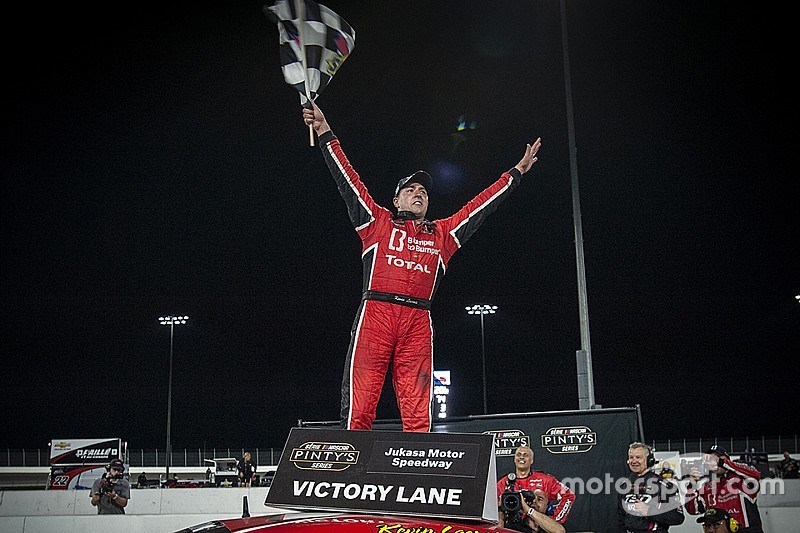 After a frustrating finish in the season opener last month, Lacroix finally had a reason to celebrate holding off Cole Powell in a green-white-checkered finish to win the Rankin Construction 200 at Jukasa Motor Speedway on Saturday.

While it’s his ninth Pinty’s Series win for his career, it was his first on an oval track and he did it in dominating fashion Saturday. He took the lead on Lap 79 and never looked back.

“The team and I have been working on our oval track program for two years and today we had a great car and everything worked out for us,” said Lacroix. “It was nice to break through that wall (of a first oval track win) and I can’t wait to get to the next oval race.”

Lacroix was enjoying a healthy lead of over two seconds when the last caution of the race was given to the field to set up the late restart.

Marc-Antoine Camirand and Andrew Ranger were fourth and fifth, respectively.

D.J Kennington finished sixth, while CTMP winner LP Dumoulin rebounded after a flat tire on lap 140 and a jumping the restart penalty on lap 149 to finish seventh.

Lacroix used the win to jump past Dumoulin for the points lead by five points. Marc-Antoine Camirand sits in third with Powell fourth.

The NASCAR Pinty's Series will be back in action Saturday, June 30, at Quebec's Autodrome Chaudiere.