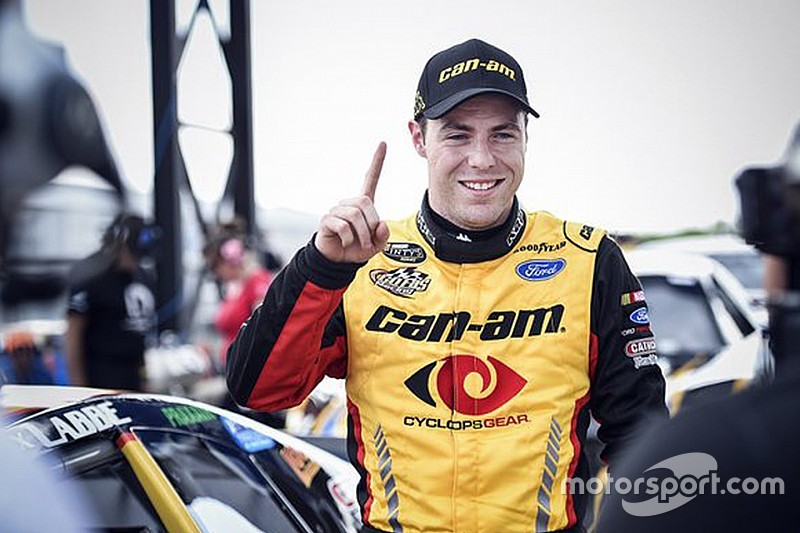 Alex Labbe held off Donald Theetge to score his second Pinty’s Series victory in three days on the annual western swing for the Canada-based NASCAR series.

If Alex Labbe is able to win the 2017 NASCAR Pinty’s Series championship, he’ll probably look back at this week’s three races as the difference-maker for him.

Labbe was able to hold off a hard-charging Donald Theetge after a late restart to win the Luxxur 300 Saturday night at Edmonton International Raceway. It was his second win in three days and allowed him to overtake Kevin Lacroix in the championship standings.

“We had a lot of speed and led a lot of laps in the race,” said Labbe. “That last restart was hard but he raced me clean and we raced hard and we were able to close the deal (with the win) and it was awesome.”

Theetge finished second and Cayden Lapcevich, who also picked up a win during the western swing this week at Saskatoon, rebounded from a spin to finish third.

Alex Tagliani and L.P. Dumoulin rounded out the top five.

Labbe entered the week 13 points behind then-leader Kevin Lacroix, but after a pair of wins and a third-place finish over the past three races, he leaves Edmonton with a 10-point lead over Lacroix, 346-336.

The two championship contenders started on the front row with Lacroix leading Lap 1 before Labbe passed him and led the next 191 circuits around the banked .25-mile track located south of Edmonton, Alberta.

On Lap 193, Theetge was able to make the pass by Labbe and take the lead for the first time and remained out front until Labbe got back by him on Lap 204.

Theetge retook the lead on Lap 206 and he and Lacroix exchanged the lead several times for the next 71 laps.

On Lap 277 Labbe made the pass by Theetge just before caution was given to the field and he remained out front the rest of the race. The seventh and final caution of the race was given on Lap 289 for a spin by Larry Jackson.

Labbe was able to get a good restart and hold on for his third win of the season and fourth of his career.

“I thought you go back to the last completed green flag lap on that caution that was given when Alex and were racing for the lead (on Lap 277),” Theetge said. “But those are the rules I guess and we came home second. We’re going to win one of these races soon. We have a very good car and crew and it won’t be long before we’re in Victory Lane.”

D.J. Kennington, who collected a pair of runner-up finishes on Wednesday in Saskatoon, was sixth followed by Mark Dilly, Anthony Simone, Lacroix and Adam Martin in the top 10.

Lacroix was running in the top four when he made contact with Lapcevich that NASCAR officials determined to be aggressive driving and he was given a subsequent drive thru penalty. That ended his chances to contend for the win and cost him valuable points in the race.

Larry Jackson finished 11th in the race subbing for Andrew Ranger who had to leave the track during practice to get treatment at an area hospital. Ranger was unable to get clearance to race Saturday night. He was released from the hospital later that night.