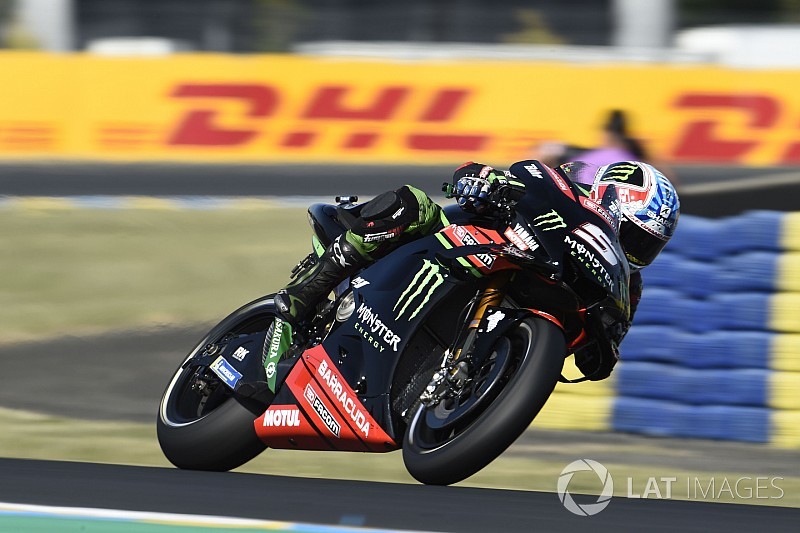 Tech 3 Yamaha's Johann Zarco says he was “confused” when he saw the laptime that secured him pole position for the MotoGP race at Le Mans.

The Frenchman said he was caught out by the laptime, and even admitted that the surprise hampered his final lap in Q2.

Recounting his session, Zarco said: “I felt on my first exit with the first new tyre that the first lap you can have some extra performance, but I was not able to use it well.

“And when I saw this laptime on the dashboard, I didn't really believe it, I was even wondering if it's a good time, I was a bit confused.

“I tried to do it again next lap but was, almost because of the surprise of the lap before, [was] difficult to repeat it.”

As the chequered flag flew, Zarco watched rival Marc Marquez's final attempt on the big screens around the track – as the Spaniard came up just a tenth short of pole.

“I had the chequered flag, I saw my name in pole position, I saw the crowd was quite happy - but then I was looking on the screen and seeing Marc, that he was pushing,” Zarco recalled.

“And you are thinking that, if he's the only one that the camera is filming, maybe he's going fast. I said 'second is going to be nice anyway' but, no, was pole position.”

But Zarco's race pace has been strong throughout practice, and he is convinced he is edging ever closer to a maiden victory.

“I'm happy that we're working well and here it's almost like easier to find the pace compared to other tracks, because we don't feel a big drop on the tyre," he said.

“So it can be an advantage for me, for the Yamaha guys, that we are not struggling with that. I don't know.

“Marc is the strong guy at the moment, but we cannot expect someone [will be] stronger than the other one - just go, try to lead the race, would be good at the beginning to have less risk as possible in the group, and then see what happens to fight for the victory.

“But every weekend I feel more chance to catch the victory.”