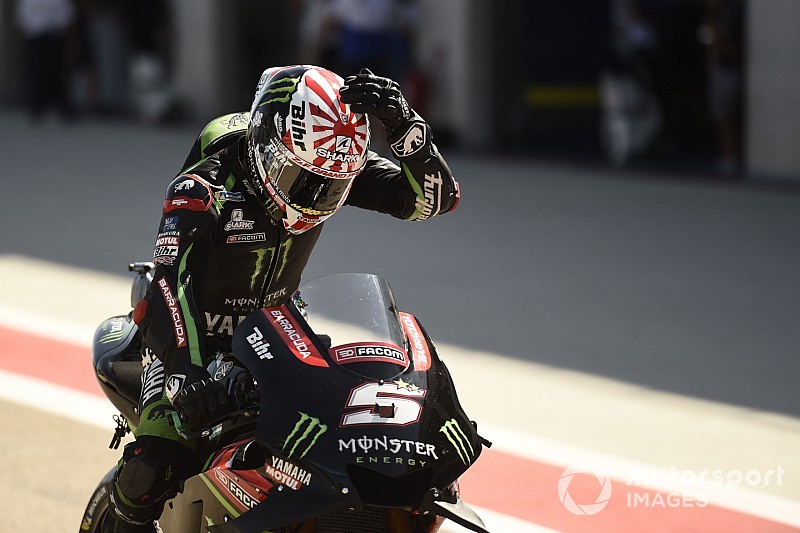 Tech 3 rider Johann Zarco has said there is "no solution" to Yamaha's recent problems in MotoGP following another dismal showing for the brand at Aragon.

Yamaha is now amid a 23-race winless streak in MotoGP, and the Iwata-based manufacturer has failed to even score a podium finish in the past four race weekends.

Zarco, along with factory riders Valentino Rossi and Maverick Vinales, has also struggled for most of the season despite a strong start, failing to take a top-six result since Jerez in May.

Yamaha's long-standing rear traction issues were accentuated at Aragon, owing to both the layout of the track and high temperatures, and Zarco insists there is nothing he or his Tech 3 crew to combat the issue.

"There is no solution because if you try to go fast into the corner you slide," said Zarco. "If you try to slow down to have better acceleration, the bike doesn't have acceleration so then I don't know where can I go.

"We know that with the team, since now a long time and we know that we have to play with it, to ride with it.

"The problem is when you are in that position I am now, it is sad because you give all what you have to give and then you even wonder if you are okay or not as a rider."

Zarco had his worst race result of the year so far at Aragon, where he finished 14th. The Frenchman said he "can't enjoy" riding his two-year-old Yamaha bike as he wasn't even able to be part of a group fighting for 10th.

"I had a good start and could fight a little bit [Danilo] Petrucci, that was fun at the beginning on the race, but immediately this first group, it was seven riders I think, they were going away and I could not follow them.

"Then for me the race has been worse and worse, every lap.

"Then fighting for the 10th position with [Franco] Morbidelli, Bradley [Smith], it was also [Takaaki] Nakagami and [Maverick] Vinales, it could be fun but I am struggling too much to fight.

"That is pretty sad because I would like at least to enjoy but I am fighting against the bike more than what I can ride it.

"It is too many races that I am in this situation but I need to every time give the best and hope that for the next races I can have a better feeling maybe thanks to a different track."

Zarco reckons his good form at the end of 2017 and in the beginning of 2018 was down to him reaching the full potential of his bike, but added that the others have caught up since then.

"From last year and the way we begin the season this year, I think we were using most of the time 100 percent of the bike, better than what the others were doing," he said.

"But now this 100 percent is not enough, and this makes the biggest difference, because I cannot find other reasons."