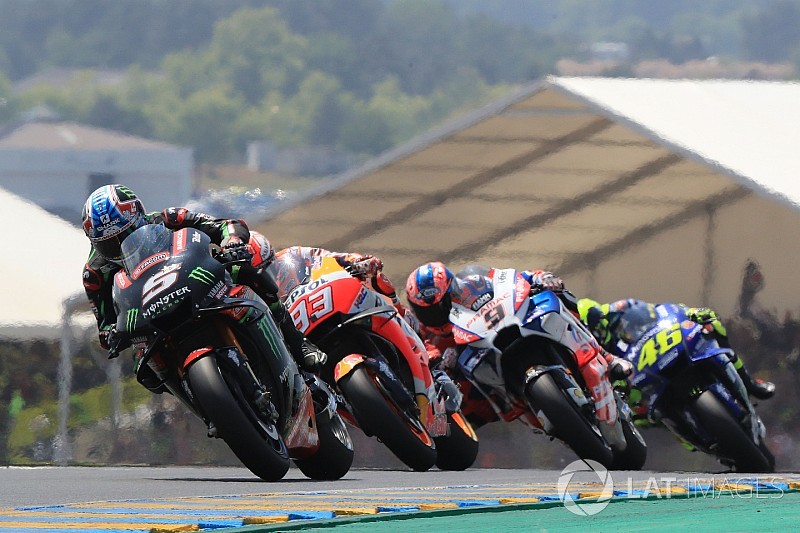 Johann Zarco admits his impatience trying to pass Jorge Lorenzo for the lead of his home MotoGP race was what caused him to crash out at Le Mans.

Tech 3 Yamaha rider Zarco thrilled the French crowds on Saturday when he beat Marc Marquez to score pole position with a new lap record around the Le Mans Bugatti Circuit.

He slipped to second at the start of the race behind a fast-starting Lorenzo, and was still running in that position when he lost the front end and crashed at Garage Vert on the eighth lap.

Explaining the incident post-race, Zarco admitted he pushed too hard to clear Lorenzo early on, even though the Spaniard's pace dropped dramatically in the latter part of the race.

"I think I could have the pace, I don't know for victory but for the podium, and second place was possible," said Zarco.

"Normally with the bike getting more light and with less fuel after half-race [distance] I could have an advantage. But the problem in all these laps at the beginning of the race [was] to try to overtake Lorenzo has been too difficult.

"I tried to do it but I was losing a lot in acceleration and then when you have to catch him back and then think about how to overtake him, this I think took all my energy.

"I was [pushing] more than 100 percent to do it and that is what it pushed me to the mistake in that corner. I did not expect to crash.

"I should have maybe waited to have less fuel and feel more comfortable and wait that maybe Jorge can go a little bit slower to overtake him. But the way I was pushing already at the moment didn't give me the possibility to act in this way.

"If I maybe tried to wait even more, I [could have] lost more positions."

Zarco denied that the pressure of trying to give the passionate French crowd a home win to celebrate was a factor in the incident, but admitted the experience would help him "grow up".

"I don't think it is extra pressure; that crash is just that the [result of me] giving the best to dream about victory, that's all," he said. "I will keep that mind because it makes me grow up.

"I think now with the experience for sure we can say I can have some pressure [with] all the people screaming my name. But I am happy to have this situation.

"I try to take it as positive, so yesterday I enjoyed it. It was great emotion to be at the starting grid and see all the people, even now just before the start to hear La Marseillaise.

"I was smiling and tried to relax myself so I was ready in the mind. When we start the race, it was necessary to accept I have a machine to fight for victory."